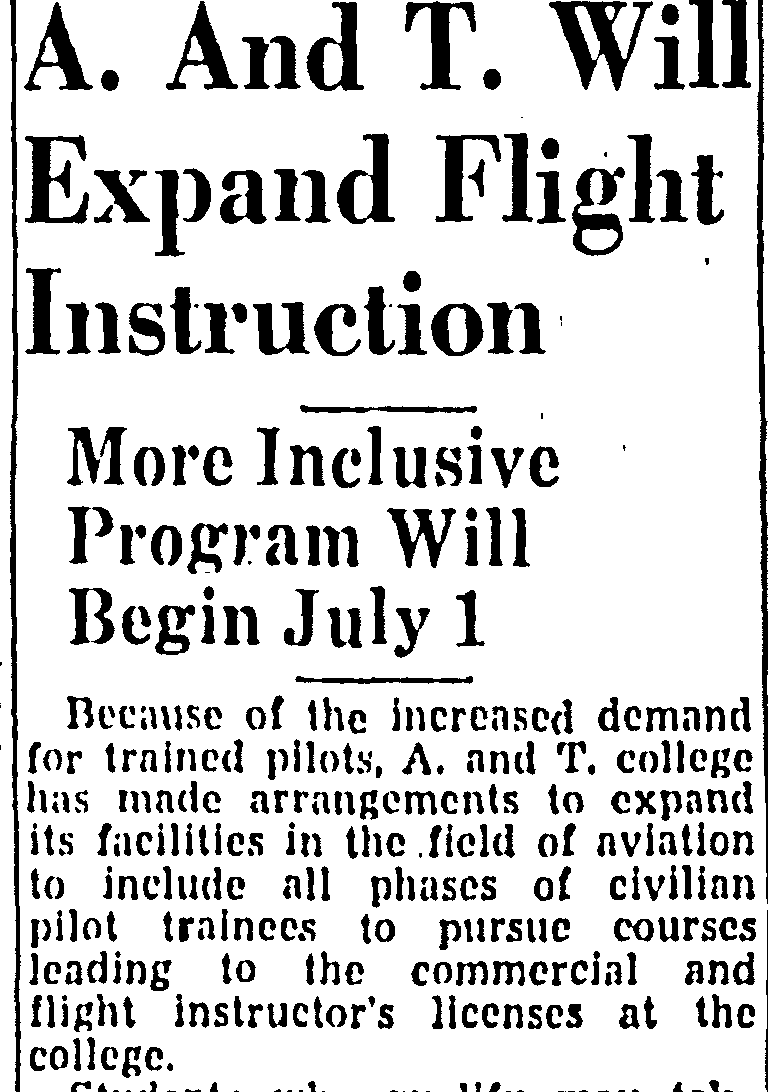 Image: NC A&T announced in this April 14, 1942 Greensboro Daily News article that they would be expanding their flight training program. The school was one of six black schools selected for the Civilian Pilot Training Program.

Yes, there were blacks trained to fly in North Carolina and it happened in Greensboro, North Carolina. Few people know that the very program that paved the way for flight training at Tuskegee Institute opened the same door for five other black colleges in the United States.

North Carolina Agricultural and Technical State University was in that number.

On June 27, 1939, President Franklin Roosevelt signed the Civilian Pilot Training Act, which gave the Civil Aeronautics Authority (predecessor to the Federal Aviation Administration) power to train pilots in preparation for World War II, according to the National Museum of the United States Air Force’s website. More than 1,100 universities and more than 1,300 certified flight schools around the country were selected to house pilot training programs on their campuses. Roosevelt, like European leaders, wanted to bolster the number of pilots in the American military and saw where the colleges and flight schools were the way to effectively increase the number of pilots in case the United States entered World War II, according National Museum of the U.S. Air Force’s website.

Illinois Republican Congressman Everett Dirksen introduced a provision in the act that stated, “None of the benefits of training or programs shall be denied on account of race, creed, or color,” according to the United States Department of Transportation.

Students learned on Oct. 1, 1940 that A&T would offer flight training in conjunction with the ground school courses that were already offered at the school, according to an article in the Greensboro Daily News. You had to be at least a sophomore and enrolled an any of the academic programs on campus, according to the Bulletin of A&T College. Each student in the civilian pilot program had to take 72 hours of ground school where you were learned aeronautics, avionics and the physics of flight, according to the bulletin. You were also expected to complete 35 to 45 hours of flying time to earn your private pilot certificate.

A&T expanded their program to create more opportunities for black pilots. In April of 1942, the school said they were also going to offer training starting in July that would lead to students earning the credentials to become commercial pilots and flight instructors, according to an article in the Greensboro Daily News.

During the program’s tenure from 1939 to 1944, there were more than 435,000 pilots trained through the civilian training program, according National Museum of the U.S. Air Force’s website. Of that, about 2,000 of those were black pilots.

It is unknown how many of the students in A&T’s program earned the private pilot’s certificate or beyond.