Facing Their Ancestral Legacy: The Pottery of Ben Watford and Jim McDowell 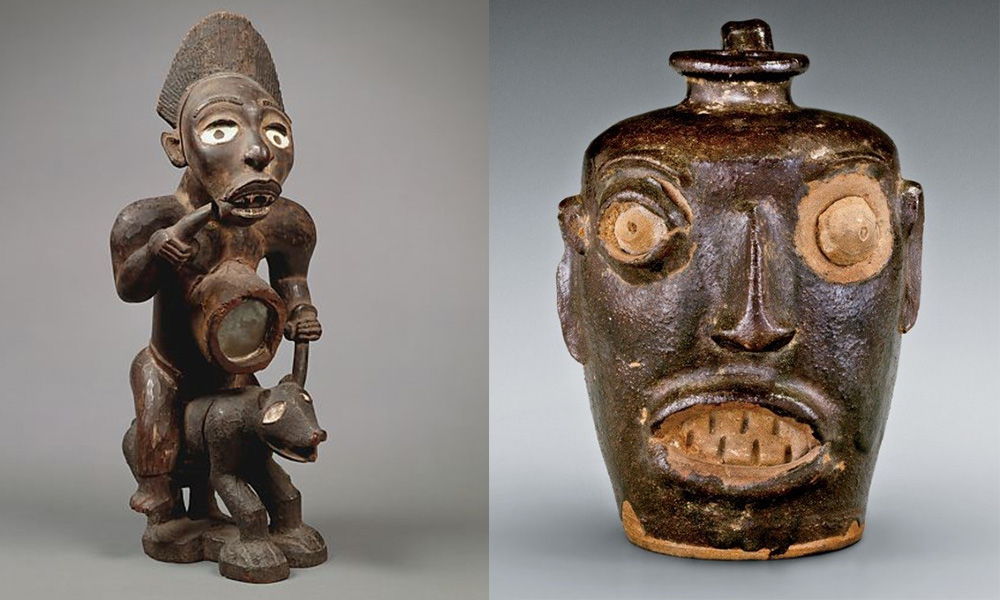 On Saturday, January 26th, the morning air crackled with energy.  Museum personnel scurried to and fro with their carts.  Old friends, family and colleagues renewed their greetings while strangers met new friends.  As everyone awaited the opening of the museum’s 18th Annual African American Cultural Celebration, where artisans, musicians, and performers have a chance to convene and share their cultural heritage through craft, the atmosphere was electric.

This festival always reminds me of the “old time” southern church homecomings where kindred spirits reconnect and meet new friends while recounting their life stories through fellowship. At this year’s festival, Jim McDowell and Ben Watford were each waiting in anticipation to meet a fellow black potter for the first time!  Ben, who is 86 years strong, lives in New Bern and has been throwing pots for decades.  Jim, 73, hails from Weaverville and calls himself the “Black Potter”; he has been behind the wheel for over 30 years.  Both potters produce a wide variety of ware, but it is their face jugs that bind them together in a timeless spirit of shared culture.

Face jugs–sometimes called ugly jugs, harvest jugs, or monkey jugs–are adorned with such exaggerated anthropomorphic features as bulging eyes and jagged teeth.  Enslaved Africans from the Edgefield South Carolina district are credited as the creators of the Southern face jug in the mid-19th century.  Although our American form is unique, humanoid characteristics are found on Greco-Roman urns, Native American “people pots,” German bellarmine jugs, and the English toby jugs.  As Robert Hunter, editor of Ceramics in America, notes, “No other category of American ceramics blurs the social and cultural boundaries between white and black like the face jug–but they likely used them in different ways and for different purposes.” African and enslaved African American potters may have been creating pots for ritualistic or ancestral protection.  American potters today however, both black and white, create the face jug for a multitude of reasons.

The jug’s African roots may be linked to funerary vessels and figures like the Nkisi–ritual objects filled with herbs, potions, or other substances–that could both “contain and release spiritual forces” to defend the grave site.  Similar African vessels were used for religious, ritual or ceremonial purposes.  The disparate enslaved Africans who survived the horrific transatlantic journey assuredly retained their Old-World cultural beliefs. Eventually they would assimilate and adapt their varied beliefs and customs to meet the demands of their chaotic enslaved environment in the New World. 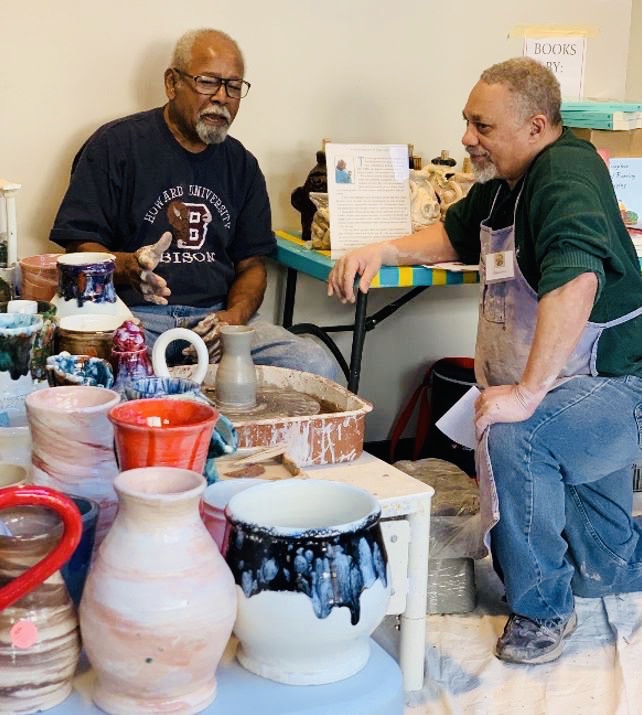 This adaptation continues through to the present day. “My jugs represent the scarification, the rite of passage and the struggle of my ancestors.  I tell those stories through my jugs,” says Jim.  Ben believes these pots–sometimes used as grave markers–speak to the dehumanization of enslaved Africans who were not, as a rule, allowed grave markers.  Although the 20th century face jug exhibits myriad design and color choices, the 19th century stoneware version remains consistent with a simple woodfired glaze adorned with bulging white eyes and gleaming white teeth often made from kaolin, a distinctive white clay regarded as a sacred substance in Africa.

But why were their features so grotesque?  Some theorize it was to keep the evil spirits at bay from the gravesite while others hypothesize it was a method to frighten the children from consuming the contents inside the jug.  Some suggest it was a silent protest against enslavement.  Watford finds “beauty in his ugly work.”  He smiles and quips, “Any imperfection adds to the beauty.”  Although we may never know the original intent behind face jugs, we can say the American face jug echoes a “stylistic and spiritual kinship” to its African motherland.

Our museum festivals celebrate the richness and diversity of our state.  They are an opportunity to bring people together to share their heritage and crafts; they give artisans the opportunity to meet for the first time, like Ben and Jim!  These modern-day griots preserve the African-American face jug tradition in North Carolina.  Learning their unique stories allows us to become vessels which preserve our state’s heritage for future generations to enjoy.