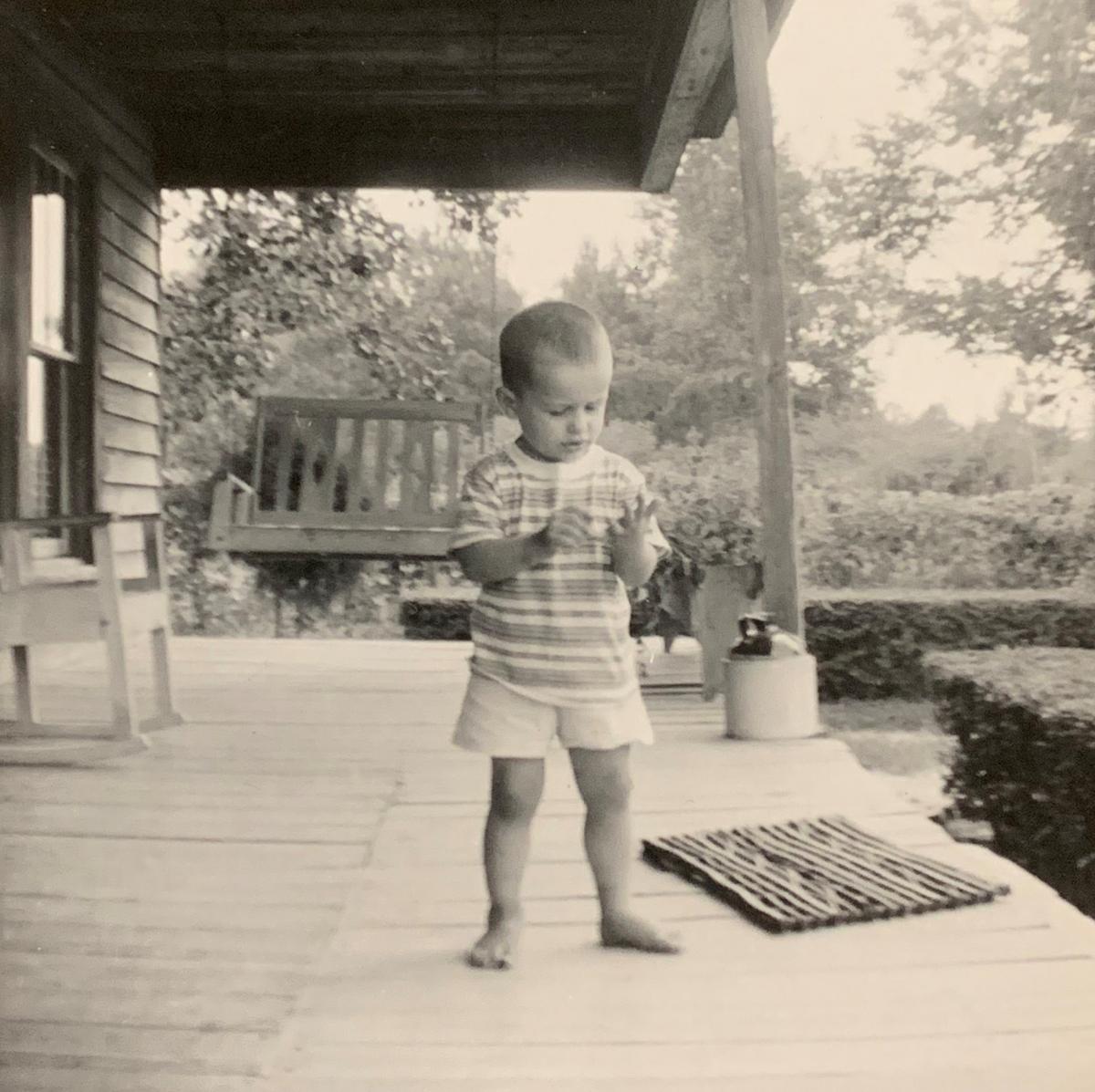 Image: Michael Ausbon, Decorative Arts Curator for the Museum, at the Ausbon family Homeplace in 1970.

Growing up as a young lad in Martin County, I passed many an afternoon into evening out with my Grandmother on her front porch. To this day, I still recall the perfume of the gargantuan gardenia bushes surrounding the porch like a fortress and the staccato cadence of raindrops performing their free concert on her tin roof. The neighbors used to stop by, occupying the porch as a refuge from the scorching afternoon heat and stifling country dust and taking the opportunity to “spread a little news,” encouraged by a cool glass of water and restored by a handheld paper fan. If I was lucky, these neighborly visits would morph into impromptu pickin’ and grinnin’ jam sessions. If a stranger approached the porch inquisition began immediately!

Writing this occasioned me to wonder how my idiosyncratic recollections of porch life compared with those of others. It prompted me to question the myriad other voices from my past who brought that space alive, to identify exactly what that space allowed as I examined the cultural phenomenon of the American front porch. We all know a porch when we see one: it is the “physical attachment that protrudes from the front of the first level of many houses and businesses.” (NPR.)

In that sense, then, the rock overhang of a cavern entrance might qualify as an early porch, but the architecture of ancient Egypt, Greece and Rome bear the greatest resemblance to our modern understanding. By the time the porch immigrated to the colonial south, our trading partners had significantly influenced our forebears. British, French and Spanish traders sailing through the Caribbean brought the cooling architecture of the islands with them. The iconic southern shotgun house and its porch have their roots in the West Coast of Africa. In the mid-1840s, after manufacturing innovations made construction easier and more affordable, the American landscape architect Andrew Jackson Downing further popularized the porch, just in time for the Victorians, who wanted to reconnect with nature and now had the free time to do so in their new outside room, thanks to the industrial revolution.

Being out on the porch conjures a particular mood, feeling, or visual experience for everyone. Although Americans, especially southerners, naively romanticize the unpretentious nature of their porches, they nevertheless remain socially complex spaces. Porch sitting takes place on a dynamic stage for storytelling, communicating moral lessons and conducting social negotiations–a porch sitter would do well to stay alert and engaged, for the porch is, as Rachel Watson explains, an “interstitial space:  not quite public; not quite private; a space rich with possibilities of representation, identification, and projection.” From the vantage of this window to the world, porch sitters can observe and explain the larger world stretching out beyond the front steps. 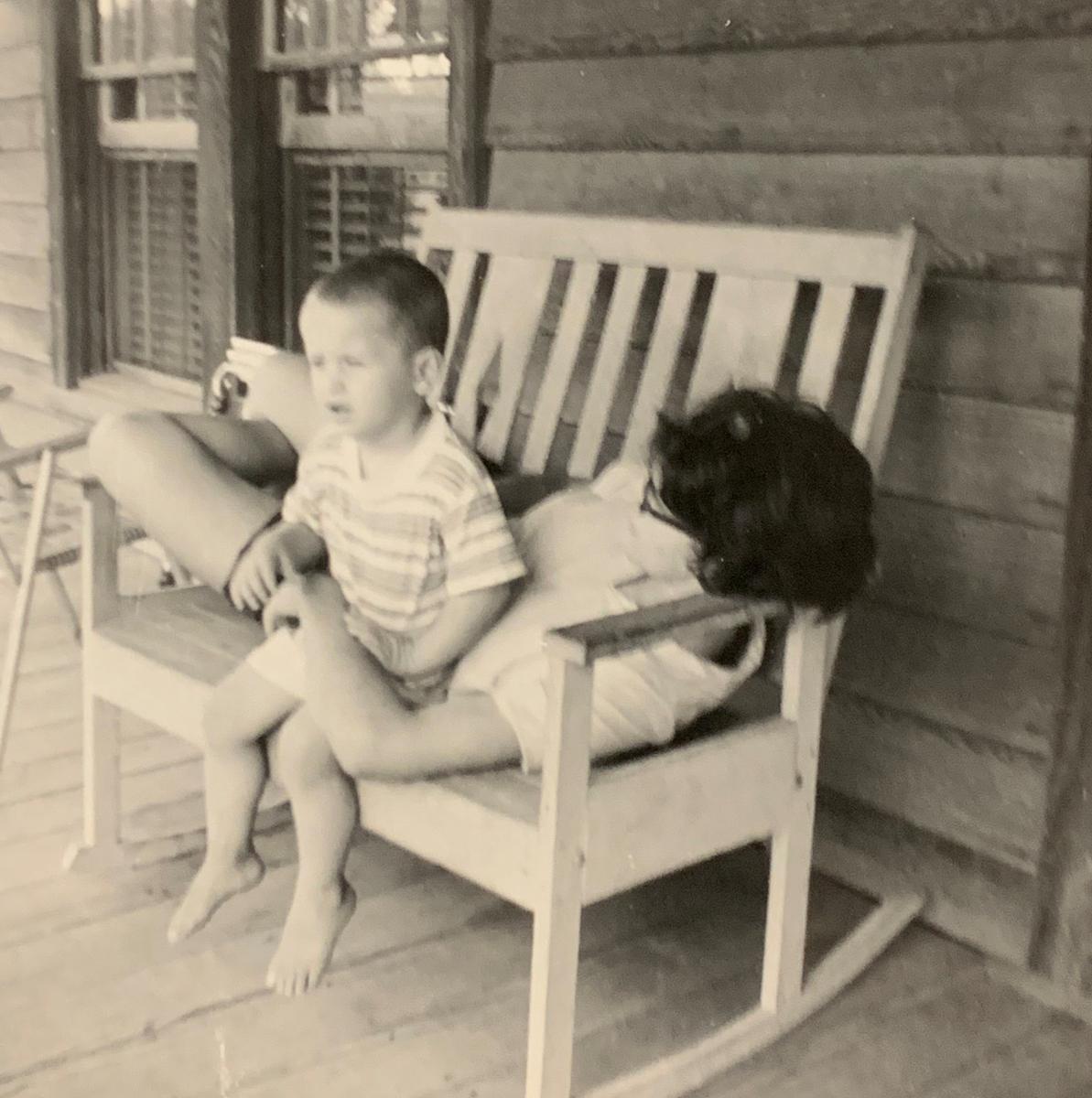 Image: Michael Ausbon, Decorative Arts Curator for the Museum, at the Ausbon family Homeplace in 1970.

Everyone knows the well-dressed Southern porch should have a pair of rockers, a few ladderback chairs scattered about and a swing hanging from the ceiling. These wooden objects often reveal traces of the many coats of paint they have donned over the years, once a carefully applied sign of pride but now a well-earned badge of age. For years, my Grandmother would faithfully repaint her same old chairs as a way to ensure that no drop of paint ever went to waste. Nowadays, folks accessorize their porches with metal gliders and matching chairs; some people even bring their inside furniture out, converting their porches into a sort of living room. However, fancy furniture is not required–if there is no place to sit, porch sitters will just stake a claim to a seat out on the steps.

Most folk will turn to a bit of well-placed crockery overflowing with flowers of every color and plants of every description when livening up a porch. Few of them know, however, of the importance of painting the ceiling “Haint Blue.” You read that right. The tradition of painting ceilings haint blue, really a soft blue-green, has its roots in Southern superstition and practicality. A haint is a restless evil spirit who intends to harm the family inside the house behind the porch. Enslaved Africans brought this superstition from the west coast of Africa to the southern United States as a form of protection.  By painting porch ceilings and the window-frame tops haint blue, the spirits would be fooled into seeing water which, as everyone knows, haints cannot cross. This strategy has even been said to repel insects on the grounds that they will think the painted ceiling is the sky. Only later did we figure out that likely the paint mixture itself–an artful combination the natural insect repellents indigo, lime and lye–was as effective against the bugs as it was against the haints.

After World War II, the front porch took a back seat. Effects of the war had altered our social boundaries and ushered in confident consumer spending, sending Americans on the road with their new cars and indoors to their new furniture.  Telephones meant we no longer had to resort to porch sitting to stay abreast of developments, and air conditioners provided a reliable respite from the heat. Porches could provide the local entertainment, but television opened up a universe of exotic excitements. As a result, front porches lost their architectural prominence and, as we started spending our outdoor time in the privacy of our backyards, we invested into custom-built decks– and, because we forgot the secret of haint blue paint, we often had to screen ourselves off from nature.

Lately, we downsizers tend to opt for claustrophobic condos rising out of our town centers. We have no room for porches. Will the porch become, as Reynolds Price wonders, “the lost room?” We Americans, through the stories we told, the moral lessons we learned and the social negotiations we conducted, have forged our values and formed our nation from the vantage of our front porches. Let us not neglect to master the art of porch sitting. No telling who might stop by. No matter, they will recognize that the front porch remains our refuge, a safe space for our family and friends, a place to count fireflies and, most importantly, a stage to tell our stories. So, come on up, put your cares away and sit a spell.