According to the American Heritage Dictionary, a hurricane is a three-dimensional. severe tropical cyclone with sustained winds at or above 74 miles per hour. When these big storms strike, they become water-shed events, reshaping the land and redefining a community's existence. Do you remember the last hurricane to hit North Carolina? If so, how did the experience change you? Spanning the months of June to November, each hurricane season helps write the state's historical record -- from the demise of the Roanoke voyages and the Lost Colony to the torrential rains of Hurricane Ivan in western North Carolina in 2004.

Before the Internet, television, newspapers, and even our grandparents' memories, how did we learn about events like hurricanes that occurred a hundred or more years ago? Prior to the 1900s, not many Tar Heels could read or write. But those who could often wrote about these experiences.

When John Lawson was traveling through the Carolinas in January 1701, he heard stories about and saw some of the devastating effects of a hurricane that had hit a few months before. Near present-day Beaufort, South Carolina, for example, Lawson's party "came to the Side of a great Swamp, where we were forc'd to strip ourselves to get over it, which, with much Difficulty, We effected. Hereabouts, the late Gust of Wind, which happen'd in September last, had torn the large Cypress Trees and Timbers up by the Roots, they lying confusedly in their Branches, did block up the Way, making passage very difficult." This major storm mangled the Carolina coast after making landfall north of Charleston, South Carolina, on September 16, 1700. Lawson wrote about the storm's effects in his book A New Voyage to Carolina, published in England for the first time in 1709. Because he was an eyewitness, we can use his book as a primary source. (In Lawson's time, the American Indian word hurricane had not yet become part of the English language.)

Lawson did not live on the coast when it was hit by the 1700 storm and had the chance to return to London. But what if you were affected by a "late Gust of Wind in September" in the royal colony of North Carolina? What if you didn't have the opportunity to publish a book about it but lost all of your earthly belongings? How would anyone know? How could anyone help?

In September 1752, a storm struck the Onslow County barrier islands, further dredged the New River Inlet, and blew the county seat of Johnston right off the map. How do we know? We can learn from primary sources like government documents. Legal records, for one, tell us about an interruption in normal activities. The first order of business for the Onslow County Court of Pleas and Quarter Sessions of Spring 1753 was to address the "loss of records from the destroy'd courthouse from the violent storm of September last." The Onslow court books date to 1732. Twenty volumes are in the county records at the North Carolina State Archives; this particular record is found on page 17 of volume 5. 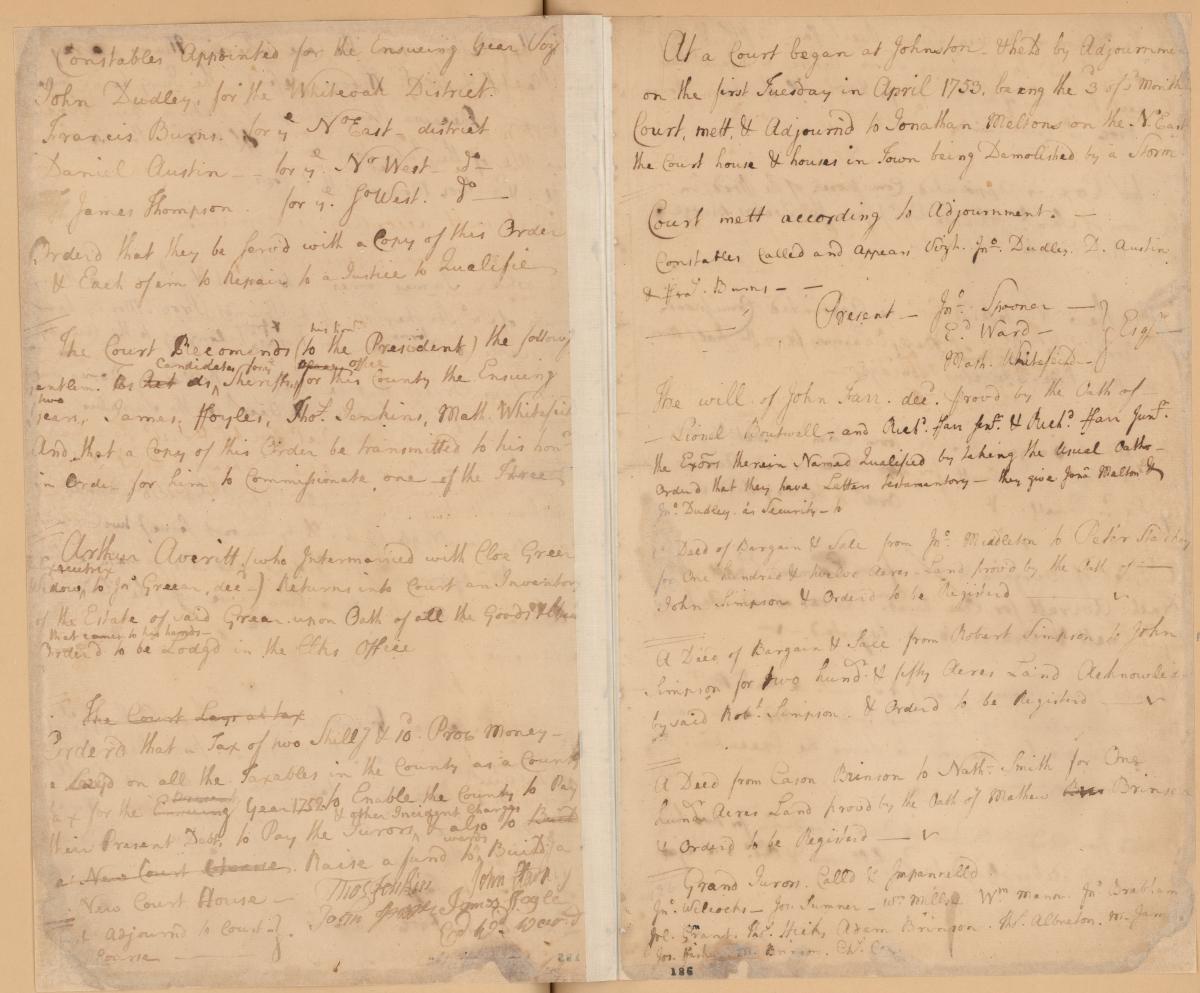 As in many hurricanes, the crops, timber, and livestock of Johnston's residents got strewn about Onslow County and washed into the Onslow Bay. The loss of the records, however, proved equally devastating. Residents eventually gathered themselves and petitioned, or asked, the Colonial Assembly meeting in New Bern that March to replace the records. New Bern was the provincial capital of the colony at the time. This petition was eventually codified into law as "An Act to relieve such persons that have, or may suffer, by the loss of the Records in Onslow County." The hurricane had wreaked havoc on the lives of the colonists in Onslow County. They asked the Assembly for help to rebuild their communities, courthouse, and jail. They also needed help to survey a new site for their county seat. On October 9, 1755, the Colonial Assembly passed another bill to help the residents "Appoint a place for Erecting the new Court House & Prison in the County of Onslow and other Purposes therein mentioned." Since 1903, such Colonial Assembly records have been kept in the State Archives. 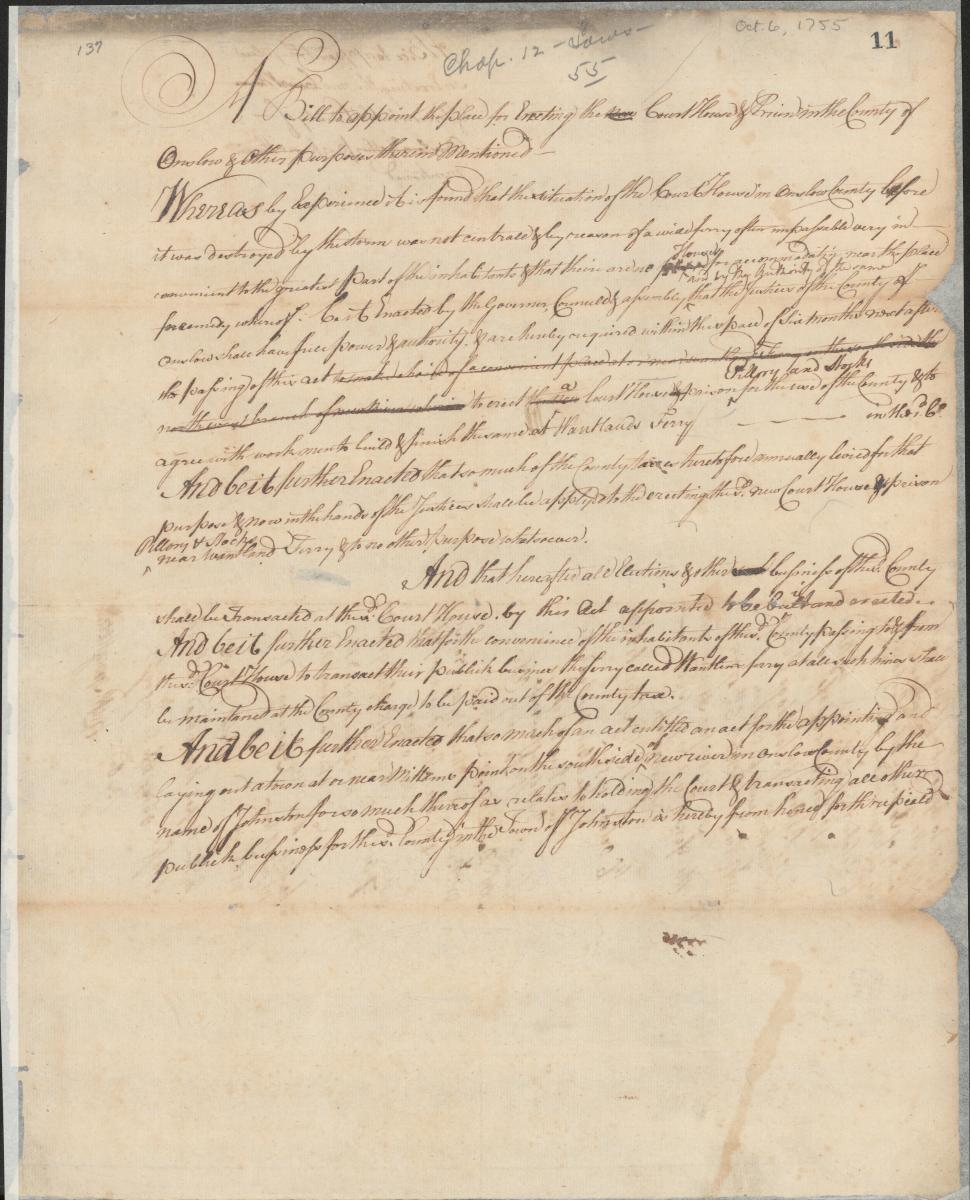 Image: North Carolina Colonial Assembly Session Records, 6 October 1755 Petition to “A Bill to Appoint a Place for Erecting a (new) Courthouse and Prison in the County of Onslow and Other Purposes Therein Mentioned” filed after the devastating Hurricane of 1752 that wiped the former town and county seat of Johnston, NC from the map.

Construction began on the new Onslow County courthouse in 1757. This time, it was located farther inland, near Wantland's Ferry, later known as Snead's Ferry. The original courthouse at Johnston had been completed only a year before the hurricane of September 1752. Therefore, the Moseley map published in 1733 (another primary source) shows only the King's Highway, a ferry, and the New River Inlet in that area. By the time the Collett map of the colony was published in 1770, Snead's Ferry is shown farther up the New River, away from the ocean.

A new town grew up near the courthouse and Wantland's Ferry, which was located on the King's Highway, near modern-day Highway 17. The General Assembly in Raleigh officially authorized the new town in 1843, and again in 1849. It was named for the first president that North Carolina gave the nation: Andrew Jackson (1767-1845) was posthumously honored by the name of Onslow County's new seat, Jacksonville.

The September 1752 storm caused a lot of destruction. This hurricane, as well as the earlier one that Lawson described, undoubtedly left memories for the survivors. Primary sources help us piece together some of that history.