The Oakwood Cemetery is a sight to behold. The wandering brick paths invite you to take your time and enjoy the day. Stately stones mark the final resting place for heads of state, brave soldiers, founding families, slaves that fought for freedom and equality, and those who only dreamt of it. One name you will find on many of the old, cracked stones is that of “Mordecai.” If you have spent any time in Raleigh’s historic neighborhoods, then you have likely come across the name. Being one of the founding families, the Mordecai's impact is hard to miss. Their house is the city’s oldest building standing on the original foundations and the land that now holds the cemetery used to all be part of the Mordecai estate. Now, in the oak trees’ shade, friends and strangers come together and celebrate the histories of those who helped shape our futures.

When Henry Mordecai donated the land for “such a sacred purpose”2 as to cradle the fallen soldiers of the South, no one imagined the laborious task that lay ahead. Following the end of the Civil War, the Ladies Memorial Association of Wake County, consisting of many widows, organized to ensure proper interment and memorial of the men who gave their lives for the South. The deed was dated March of 18671. This began the preparations of the land, clearing trees, removing stumps and arranging the plots, work that continued into the summer.

All the arrangements were coming along smoothly until that summer. With the fallout of the Civil War, the Federal army began occupying the South. When the Northern troops came to Raleigh, they used the Pettigrew Hospital2 to house themselves while they oversaw reconstruction. The commanding officer looked over the peaceful yard that lay nearby and confiscated it for his own fallen comrades. This arrangement would have been fine if the yard had not already contained Raleigh’s own fallen soldiers. Not only did the officer demand the use of the yard, but he also threatened that if the bodies were not removed in two days, he would have them dumped in the streets2.

Immediately, the residents of Raleigh rallied together to relocate their fallen brothers, fathers, sons and friends. Armed with picks and wheelbarrows, the city’s young men labored ceaselessly for two days in the summer sun to dig up, move and reinter over 540 fellow soldiers with honor2. Desiring to help in this impossible task, the women walked alongside the laborers, carrying refreshments and encouraging the men at their work. Thanks to their faithful labor, not one body was desecrated. 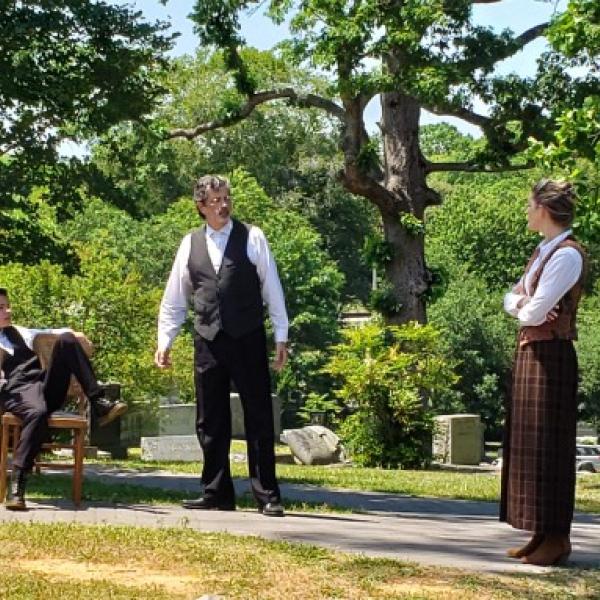 Since then, fallen North Carolinians from various Civil War graveyards, including Gettysburg and Arlington, have been relocated to the Oakwood Cemetery1. Now, a hundred and fifty years later, there are over 800 Confederate soldiers resting quietly beyond the stone arches and among the meandering pathways. Each one of them has the citizens of Raleigh to thank for a peaceful, final home.

Learn more about those residing in the Historic Oakwood Cemetery at Burning Coal Theatre's annual Oakwood Series. Every year, Burning Coal produces original short plays to bring to life the history buried in the cemetery. This year we celebrate the cemetery's 150th anniversary by bringing back the "greatest hits" of the series - including one written by Piedmont Laureate Ian Finley!