The Gallery Cart for North Carolina and the Civil War gives visitors of all ages a chance to see how peoples’ lives were altered during the Civil War as a result of food shortages on the homefront and the lack of supplies and food for the soldiers.

Many North Carolina soldiers carried a tin drum–style canteen like this one. Water was an important supply and often hard to come by. Streams, wells, and other water sources, once discovered, were often quickly contaminated by careless soldiers.

"We could get along tolerable well here if cold water was not so difficult to get. . . . There are few small springs near by, but where there is one cup of water there are ten men to drink it, and there are always careless ones enough to spoil any spring in a few minutes." —Union army private Wilbur Fisk, Petersburg, Va., July 1864

"You need not think I am suffering much; this lying on the ground and eating this food is tough at first, and so is drinking bad, muddy water, but you soon get use to it. . . . I stopped once to get a drink, but the water was covered with the slime and filth of the drainage of the Fifth Corps, and I was not much refreshed." - Private Walter Carter, 22nd Massachusetts Volunteers, Washington, D.C., 1862 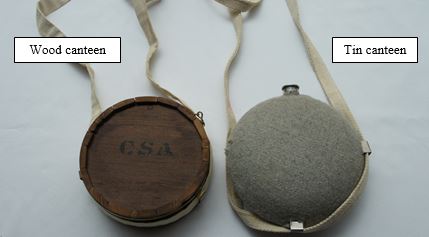 A basic tin cup was very useful. In addition to drinking from it, a soldier used it to heat food, mix ink for writing letters, or hold water for shaving.

Hardtack is a type of cracker made using only water, flour, and a little salt. Hardtack crackers were part of a soldier’s daily ration of food. Hardtack got its name because after the crackers were baked, they got very dry and hard and had to be softened in stew, milk, coffee, or other liquid before they could be eaten. Each soldier received about one pound, or 10 pieces, each day. A soldier on the march might remove a piece of hardtack and hold it in his mouth next to his cheek until it became soft from saliva. A popular camp dish, hellfire stew, was made using only water and hardtack. It was popular not because it was tasty to eat, but because it was easy to make when there was nothing else to eat.

Peanuts were known throughout the South as groundnuts, ground peas, monkey nuts, pindars, goobers, and goober peas. Pindar and goober were African words introduced by enslaved workers. Dealers of other edible nuts often referred to peanuts as “lowly” food. Peanuts were originally grown as food for hogs and other grazing farm animals. They were planted but not harvested so that these animals could forage for them.

During the Civil War, thousands of hungry soldiers from other parts of the country got their first taste of southern peanuts. From time to time, peanuts were used as rations for Confederate troops. This prompted the popular camp song “Eating Goober Peas,” which was published after the war, in 1866.

Soldiers often went hungry and would eat anything available to them. Apples were a popular food on the march. In a letter dated August 20, 1864, Private Thomas Devereux, of Halifax County, wrote about coming across an apple orchard:

"We drove our horses into an orchard full of ripe apples and all are feasting."

"I have not told you what I eat. Well, to begin, we have pretty fair beef. Sometimes bacon or mess pork. And for bread, biscuit made up with either tallow*, or grease fried out of bacon."

In a letter written on December 18, 1863, he relates catching rabbits:

"The soldiers have found out a new way to catch game. They go out in a crowd about 50 and make a ring, or rather a circle and any rabbit in that circle is just as sure to be caught as his is in there."

*Tallow is solid or hard animal fat used for cooking and for making candles and soap. 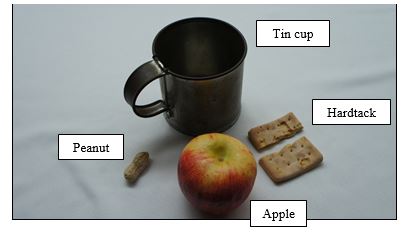 During the Civil War, the Union blockade of North Carolina ports prevented ships from bringing in needed food and supplies. Coffee, a popular beverage, was in short supply as a result. Substitutes for coffee were quickly devised using all types of foods. The items on the cart represent foods used to make coffee. (The descriptive cards offer recipes for each of the coffee substitutes and explain how people felt about their new type of coffee.) 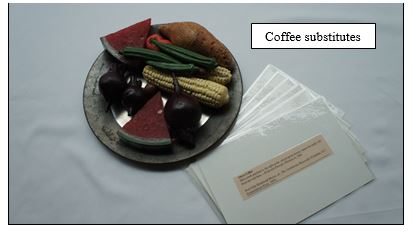 Rations were food and other items given to soldiers on a regular basis. By Congressional Acts in 1860 and 1861, soldiers’ rations increased from nine to 12 items. Besides the coffee and sugar components, which had been added in the 1830s, the flour component was increased to 22 ounces, and potatoes, yeast powder, and pepper were incorporated in the ration. The following items were regularly included in soldiers’ rations:

Whenever the supply lines were open and food was available, soldiers were comparatively well fed; however, troops were often without food.

In a letter dated January 3, 1865, Private Thomas Devereux had this to say about rations:

"We have been very good rations lately, the privates have sugar coffee dried fruit and rice."

Daily marching rations for Union soldiers consisted of a pound or less of beef, pork or bacon, nine or 10 pieces of hardtack, salt, coffee, and sugar. Confederate soldiers were given similar rations, but their situation depended on local circumstances and the availability of supplies. Both armies were forced to find food wherever and whenever they could. Wild hogs, birds, rabbits and squirrels provided fresh meat if they could be caught. Both armies foraged for food, taking provisions from family farms. There were strict rules about trespassing onto private property and only taking what the army needed in the way of supplies and food. Unfortunately; those rules were often ignored.