This Gallery Cart gives visitors a look at basic survival items used by American soldiers in the field in World War II. Some of these items can be compared to modern-day equipment used by American troops.

K rations were the army’s answer to the dilemma of feeding highly mobile troops. Compact, self-contained, easily transportable, and high in calories and nutrients, these field rations were designed for use for a short time in combat situations.

The K ration was named in honor of Ancel Keys, a physiologist at the University of Minnesota. Keys was chosen by the U.S. War Department in 1940 to assist in creating a nutritious, easy-to-carry food ration for army paratroopers.

The matches lit even when wet. The tissue was used as toilet paper. The waxed waterproof box was good for starting fires. The P-38 can opener was attached to dog tags so it would always be available. Soldiers often traded their rations—cigarettes for candy, or lemon powder for coffee. 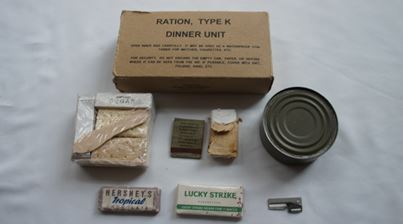 Field kitchens, water tanks, and mess tents traveled with each company at the rear of the line. The field kitchens had stoves and ovens for cooking. Soldiers used their mess kits as dishes for holding food. For clean-up, the utensils and divided plate were hung on the handle, dipped in large cans of boiling water, and air-dried. Each soldier cleaned his own mess kit. 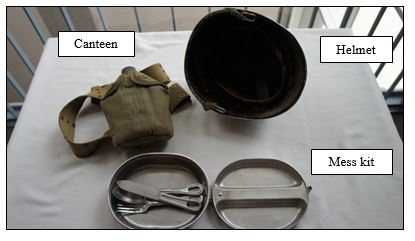 Today, soldiers in the field use individual field rations introduced in 1981.The MRE offered significant improvements in packaging and design. Bulky cans were replaced by durable plastic packets designed to withstand high-temperature storage, as well as rough handling.

MREs are packaged in 24 different menus, which have changed annually since their introduction to reflect feedback from those who eat them and the diverse eating habits of American fighting forces. There are four vegetarian menus, along with a variety of meals that would have been hard for most WWII GIs to imagine: spicy Oriental chicken, beef enchiladas, pasta in alfredo sauce. Of course, one soldier’s fine dining is another generation’s drudgery: the most common nickname for MREs is meals rejected by everyone!

From The History Channel Magazine, September/October 2005 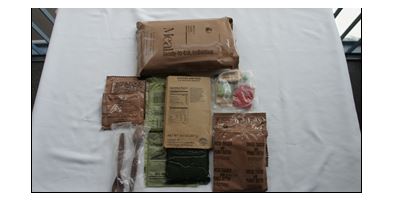 U.S. troops today use a much improved hydration system known as a CamelBak. The CamelBak is a soft canteen that is worn on the back like a backpack. The drinking hose comes over the shoulder allowing the soldier to take sips of water often keeping the hands free at all times. The CamelBak is comfortable to wear and makes no noise. It is a vast improvement over the old style canteens, particularly in extremely hot climates where hydration is so important to the health of the soldiers. The capacity of this CamelBak is 100 ounces, or three liters. Its weight when filled is eight pounds. (This CamelBak is weighted to give visitors an idea of how heavy it would be to carry around all day.) 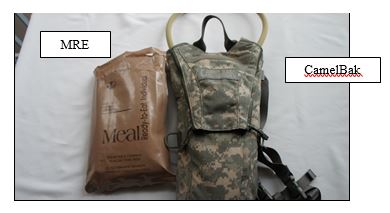