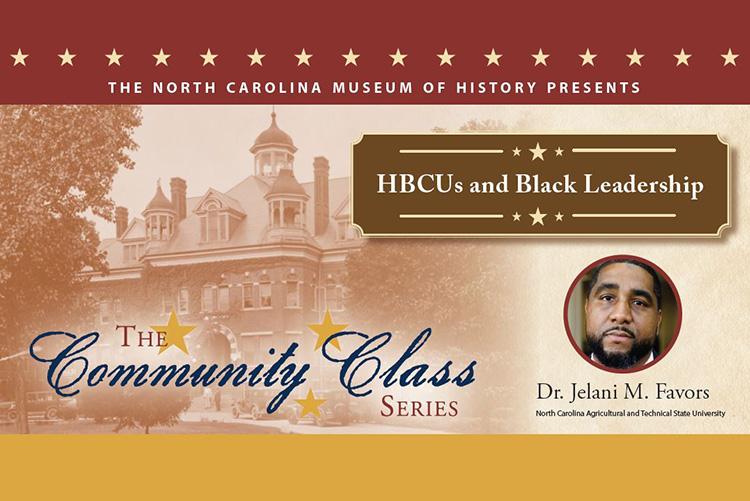 In its history, North Carolina has been home to 12 Historically Black Colleges and Universities (HBCUs). For generations, HBCUs have been essential institutions for the African American community. Their nurturing environments not only provided educational advancement but also catalyzed the Black freedom struggle, forever altering the political destiny of the United States.

Join us as Dr. Jelani M. Favors discusses his award-winning book, Shelter in a Time of Storm: How Black Colleges Fostered Generations of Leadership and Activism, and further details how HBCUs became a refuge during the oppressive Jim Crow era. He also will share how the institutions operated as vital seedbeds for politicians, community leaders, reformers, and activists, from North Carolina and beyond. Signed copies of Shelter in a Time of Storm are available for purchase in the Museum Shop.

A native of Winston-Salem, North Carolina, Dr. Jelani M. Favors is the Henry E. Frye Distinguished Professor of History at North Carolina Agricultural and Technical State University. He has received major fellowships to support his research, including an appointment as a Humanities Writ Large Fellow at Duke University in 2013, and he was an inaugural recipient of the Mellon HBCU Fellowship at the John Hope Franklin Humanities Institute at Duke in 2009.

In 2019 Favors released his first book entitled Shelter in a Time of Storm: How Black Colleges Fostered Generations of Leadership and Activism, which garnered the 2020 Stone Book Award and the 2020 Lillian Smith Book Award. Also, it was one of five finalists for the 2020 Pauli Murray Book Prize. Favors’s research and commentary have appeared in several publications and media outlets, including CNN, C-SPAN, MSNBC, The Washington Post, MarketWatch, The Atlantic, The Root, and The Chronicle of Higher Education. He earned his PhD in history and his MA in African American Studies from The Ohio State University. He graduated with honors from North Carolina A&T State University with a BA in history.