The Death of Dr. Charles Drew

To understand the legend, you have to know something about the man.

Charles Drew died at the height of his career as chief of surgery at Howard University’s Freedmen’s Hospital in Washington, D.C. But his main fame stemmed from his efforts to develop a medical procedure that has saved millions of lives. In 1940 the Second World War thundered in Europe. Doctors on both sides of the Atlantic desperately sought ways to preserve blood so they could store it for transfusions. Drew was one of the scientists who figured out how to bank large quantities of blood.

In 1941 Drew created the model for a national blood collection program for the Red Cross. You can imagine how he felt when the Red Cross announced that African Americans could not donate blood. After a public outcry against this policy, the Red Cross accepted black donors but segregated the contributed blood, at the insistence of the United States Army. Drew protested against this new policy. “There is no scientific basis for the separation of the bloods of different races except on the basis of the individual blood types or groups,” he declared. 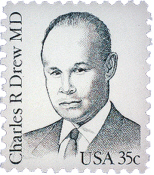 The United States Postal Service issued a stamp honoring Charles Drew in 1981 as part of its Black History series.

In the early hours of April 1, 1950, Drew was driving with three other doctors to a medical conference in Tuskegee, Alabama. Drew apparently dozed off at the wheel on North Carolina Highway 49 in Alamance County. He ran the car off the road and was badly injured. An ambulance carried Drew to Alamance County General Hospital, where he received emergency care. His injuries proved fatal, however, and he died just over an hour later.

A Tragedy Compounded by Legend
It happened one April day while he and three other doctors were driving to attend a medical conference at a southern university. Near Burlington, N.C., their automobile swerved to avoid an object in the road. Drew was critically injured and began to lose blood rapidly.

His colleagues flagged down a passing car and rushed him to the nearest hospital. At the door, he was turned away. It was a “whites-only” institution.

By the time he was taken to a nearby “colored hospital,” Dr. Charles Drew, the man who developed the theory of blood plasma and pioneered the blood bank, had bled to death.

His death highlighted the racial segregation which then existed in most southern hospitals, and still clings to many today.

—Whitney Young, executive director of the National Urban League, in the Amsterdam News, 1964

Many versions of the legend circulate by word of mouth and in the media. The mythical story even made it into an episode of the television series M*A*S*H.

Some people did die after being refused care at segregated hospitals. A few months after Drew’s death, Maltheus Avery, a World War II veteran and student at the Agricultural and Technical College of North Carolina (now North Carolina A&T State University) in Greensboro, also had a car accident in Alamance County. He was sent to the same hospital as Drew, where he was stabilized and sent on to Duke Hospital in Durham, which could better care for his injuries. But Duke’s beds designated for African Americans were full, so the hospital sent him on to Lincoln Hospital, which served the black population. Avery died shortly after arriving at Lincoln, and his death set off a nationwide scandal.

Drew’s legend grew out of the social realities of his time. That a black pioneer in blood plasma research could bleed to death did not surprise many black Americans, who constantly experienced the pain of segregation. Though factually false, the Drew story spoke to a profound truth.

Legal segregation is gone. But it has not been forgotten, as continued tellings of this legend indicate. Efforts by Drew’s family, the American Red Cross, and professional historians to refute the legend have met with little success. Denials of a story’s truth are rarely as powerful as the legend itself.