Home / An Evening with Rufus Edmisten

An Evening with Rufus Edmisten 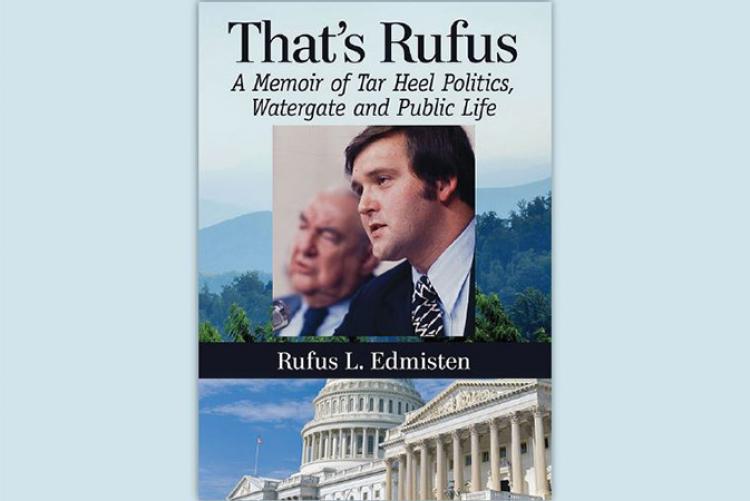 Possibly the most colorful politician in North Carolina’s last 50 years, Rufus Edmisten tells his story in his words in his memoir, “That’s Rufus.” The title is, fittingly, informal. He’s never been known to friend or foe or family as anything but “Rufus.” That reflects not just the rarity of that first name in recent generations, but his mountain upbringing. To introduce himself to anyone as “Rufus Edmisten” would have displeased his strong, plain-spoken parents, Walter and Nell Edmisten.

Tall, burly, round faced, with twinkling eyes and an uncanny memory for names and faces, Rufus Edmisten was “launched” into politics by a political rocket called Watergate, and fellow mountaineer Senator Samuel J Ervin, Jr. Just out of college Edmisten went to Washington and began working during the day for the senator he’d long admired while he attended George Washington Law School at night. When that senator, an unlikely political hero with a conservative record, championed integrity with his Watergate hearings, Edmisten was sitting behind him as the committee’s deputy chief counsel. His chubby cheeks were pinching a pipe most of the time, and to better serve the senator, Rufus stayed close during the proceedings. That, as it happened, also put him in front of the national TV cameras every day for weeks. Watergate ended, and Rufus came home to be North Carolina’s attorney general, winning his first full term in 1976, a second in 1980.

Copies of "That's Rufus: A Memoir of Tar Heel Politics, Watergate and Public Life" will be available for purchase at the Museum Shop. Proceeds from his book will go to his Super Kids Foundation,
which has helped hundreds of disadvantaged children all over North Carolina in the last 25 years.

For more information about this event, please contact: Cheryl Mattingly at cheryl@rufusedmisten.com.