Music of the Carolinas: Judy Stout 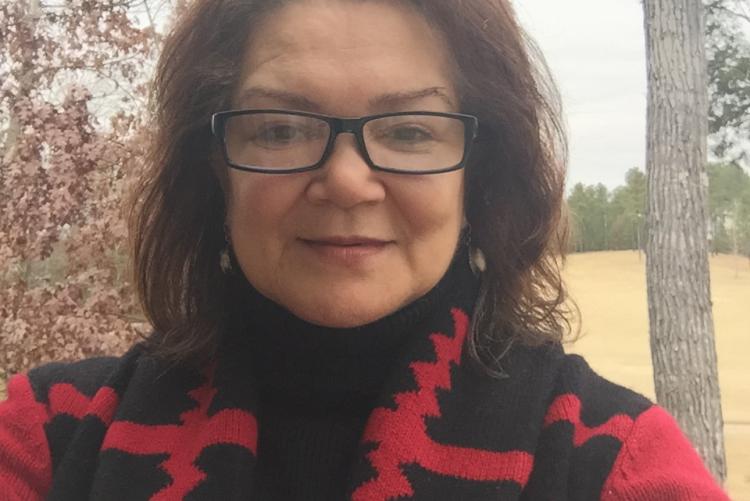 Experience Lumbee Folklore Stories told in American Sign Language (ASL)! Judy C. Stout is a member of the Lumbee Tribe, reared in Pembroke, N.C. She earned a masters degree in School Guidance from Gallaudet University, and she worked there for 28 years. She provides consultation on education, information, and referrals on Deaf and Hard of Hearing American Indians. Q&A session will follow. This program will include ASL interpreters.

Presented with PineCone and support from MOHA/museum members. Join MOHA before or after the concert—for half-price museum membership! In addition, enter our raffle for a prize from the Museum Shop (winner will be drawn today).

Storytelling is an educational tool that is universal across cultures and languages. Every culture uses stories to preserve and pass down history, knowledge, and experience. The stories you hear will come from both Lumbee folklore and from the personal history of Judy Stout, a member of the Lumbee tribe who grew up in Pembroke, N.C. She earned a Master’s degree in School Guidance from Gallaudet University, and she worked there for 28 years.

The Lumbee Tribe of North Carolina is a state recognized tribe, and more than 90,000 people identify as Lumbee. Most of them live in Robeson, Hoke, Cumberland and Scotland counties in southeastern North Carolina. The Lumbee Tribe is the largest tribe in North Carolina, the largest tribe east of the Mississippi River, and the ninth-largest organized tribe without federal recognition. Pembroke, North Carolina is the economic, cultural and political center of the tribe. The ancestors of the Lumbee were mainly Cheraw, Tuscarora, and related Siouan-speaking Indians who have lived in the area of what is now Robeson County since the mid-1700s.

The state of North Carolina legally recognized the identity of the “Indians of Robeson County” in 1885. In 1887, the state established the Croatan Normal Indian School, which eventually became The University of North Carolina at Pembroke. In 1952, the tribe voted to adopt the name Lumbee to recognize the relationship the people have with the Lumbee River and Cheraw Community.

The Lumbee participate at the state level in many ways, including in the North Carolina Commission of Indian Affairs. They also participate in national organizations such as the National Congress of American Indians and the National Indian Education Association.

American Sign Language (ASL) is the predominant sign language of Deaf communities in the United States and most English-speaking parts of Canada. ASL originated in the early 19th century in the American School for the Deaf (ASD) in Hartford, Connecticut. Since then, ASL use has been widely adopted via schools for the deaf and Deaf community organizations. Many ASL signs include movement of the face and torso as well as the hands. English “loan words” are often borrowed through fingerspelling, but ASL grammar is unrelated to that of English.

Miller, Katrina. (2018). Circle of Unity: Pathways to Improving Outreach to American Indians and Alaska Natives who are Deaf, Deaf-Blind, and Hard of Hearing.

Paris, Damara and Sharon Wood. Step into the Circle: The Heartbeat of American Indian, Alaska Native, and First Nations Deaf Communities. AGO Publications, 2002.