Sailing the Seine into History, By Chancy Kapp

Our group boarded the S.S. Joie de Vivre in Paris Sunday afternoon and set sail down the Seine, heading away from the hills and forests of World War I battlefields toward the lush fields—and historic beaches—of Normandy.

Early in the trip, I asked our travelers why they had signed on. 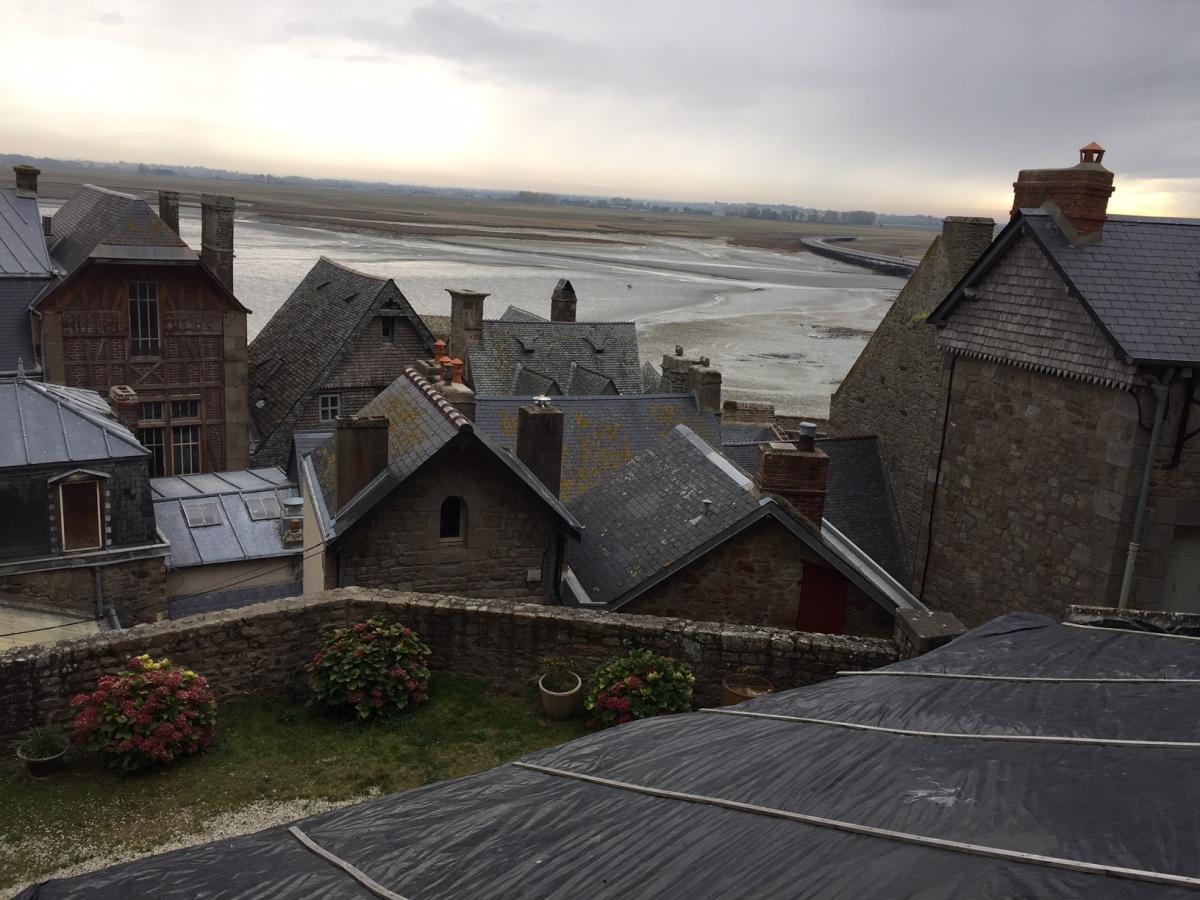 The most popular answer was, “I have always wanted to see the D-Day beaches.  It’s bucket list material!”

We headed that way, with what we thought were a few scenic stops along the way before we returned to battlegrounds.  In France, though, warfare is rarely far from memory.

We tied up first at the foot of Chateau La Roche-Guyon between Paris and Rouen.  Built over many centuries into and onto chalk cliffs, the Chateau was home to the Rochefoucald family.  One Duke of the line traveled to North America to escape the French Revolution and wrote a famous travelogue.  Another served as translator for Benjamin Franklin  during Franklin’s time in France. Unusual in its time, the noble family was admired by the common people for progressive ideas. 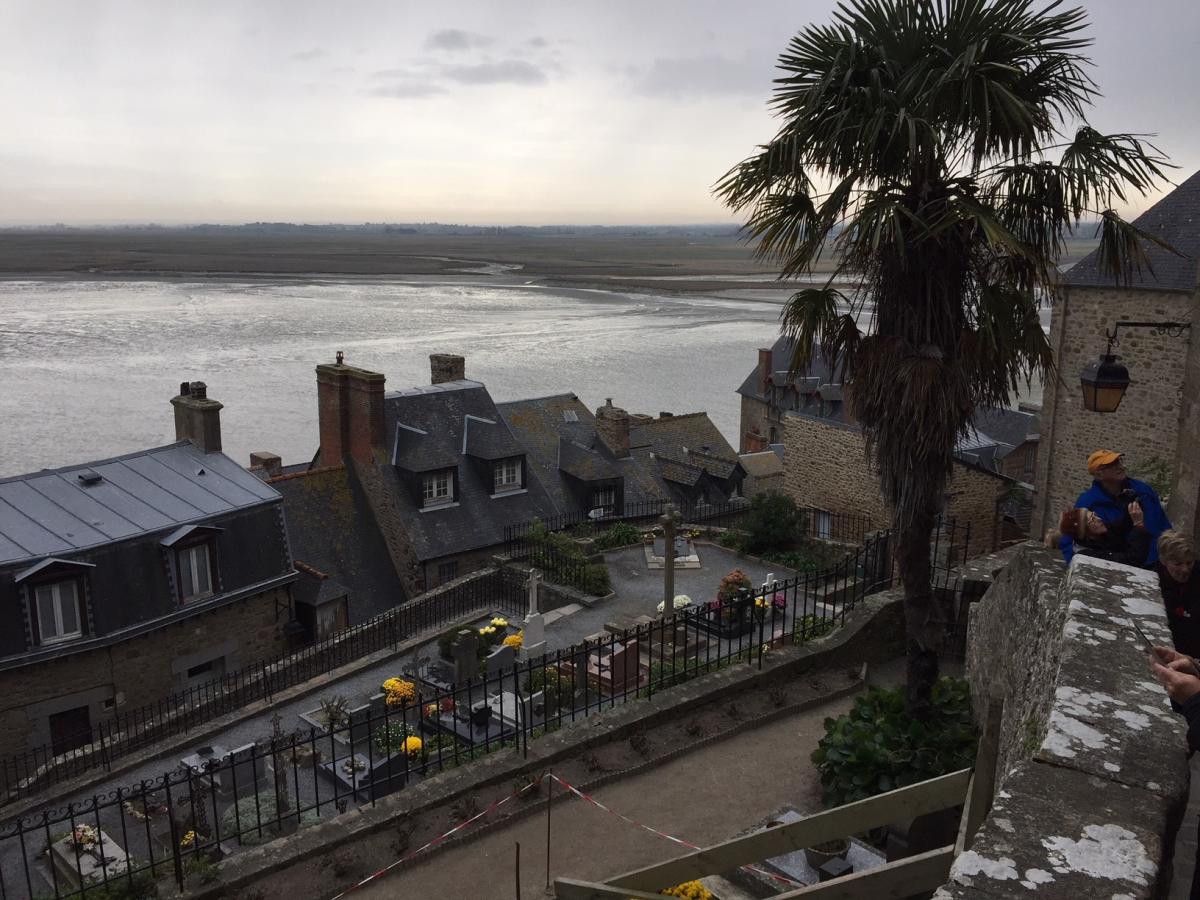 Yet the graceful chateau has a dark history that surprised us during our tour.  Nazi General Erwin Rommel chose it as his headquarters for commanding the Atlantic Coast in World War II.  The old chalk tunnels stored thousands of rounds of ammunition while the family still lived upstairs.

The strategic location between Paris and the coast did Rommel little good on D-Day, as he was in Germany for his wife’s birthday. 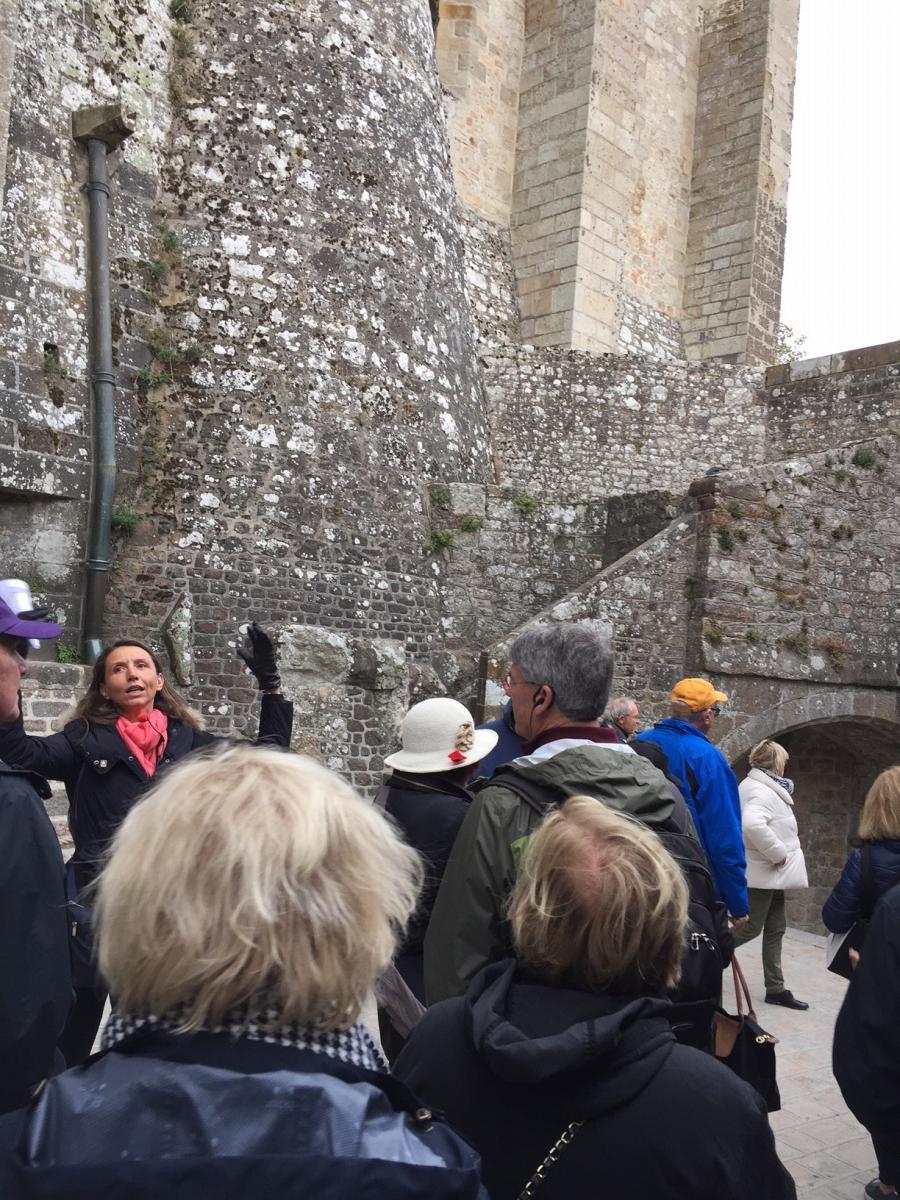 Farther down the Seine, we moored at Vernon, a small medieval town near painter Claude Monet’s gardens at Giverny.  While museum director Ken Howard struck out with our more intrepid travelers on bicycles, the rest of us strolled through the pretty village guarded by impressive castles on both banks.

My husband, Keith, a huge fan of the Vikings TV series, took one look at the narrow bend in the river and exclaimed, “This is where Rollo led the raids toward Paris!”

Our guide soon confirmed the bloody history of the Norsemen—Normans—who gave their name to Normandy.

Tuesday brought us to a “bucket list” destination for me and several others—the otherwordly Abbey on Mont Sainte-Michel off the Norman coast.  A long bus ride from our mooring at Rouen, the abbey perches atop a granite outcropping in a bay surrounded by quicksand, salt flats and tidal pools. 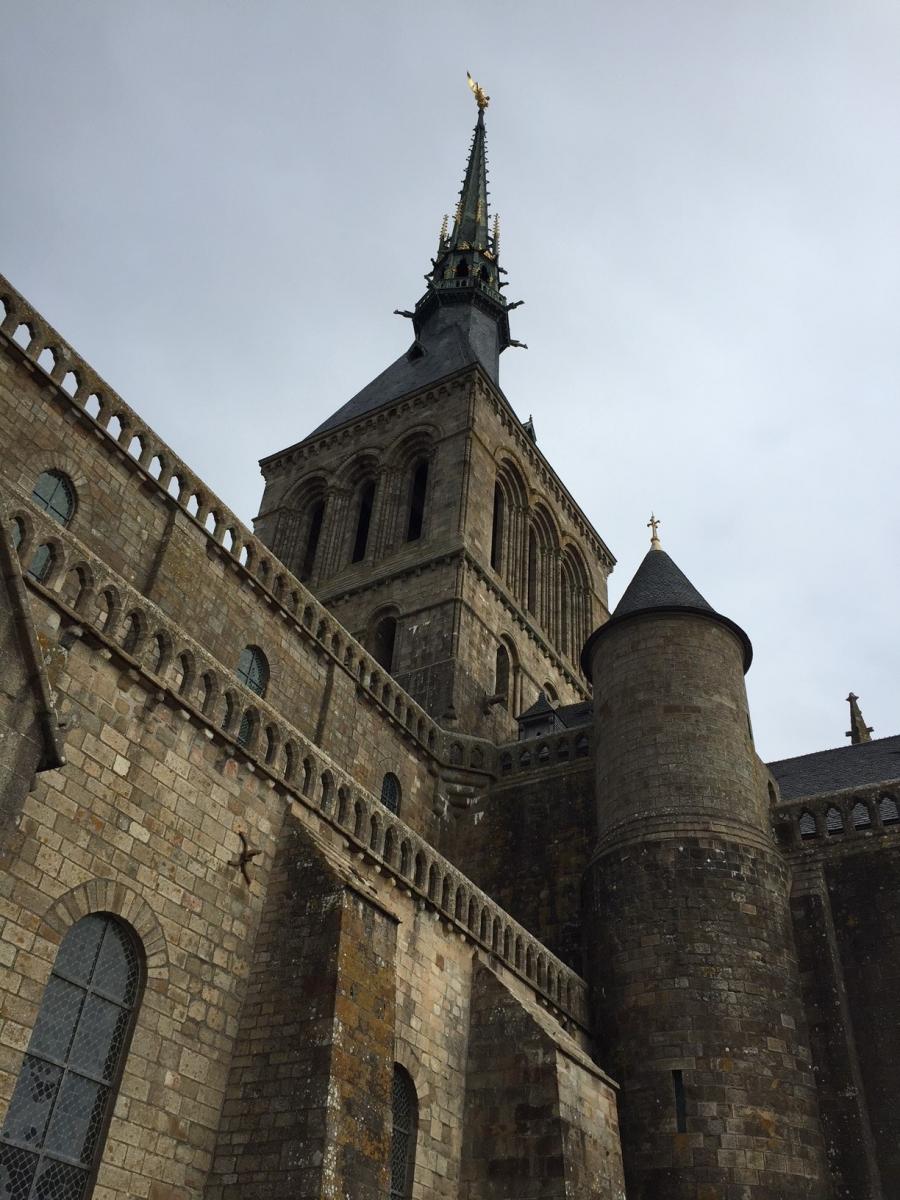 I saw a photo of Mont Sainte-Michel when I was a child, and I could not quite believe it was real.  I still can’t.  The long staircase to the monks’ church at the summit revealed cloisters, chapels and cells that seemed to be part of the Magic Kingdom or Hogwarts rather than a living community begun more a thousand years ago.

Associates Chair Bill Hamlin, no stranger to construction as the head of a roofing company, said, “This was an extraordinary experience.  I have never seen anything like this built before modern times.  How did they do this?” 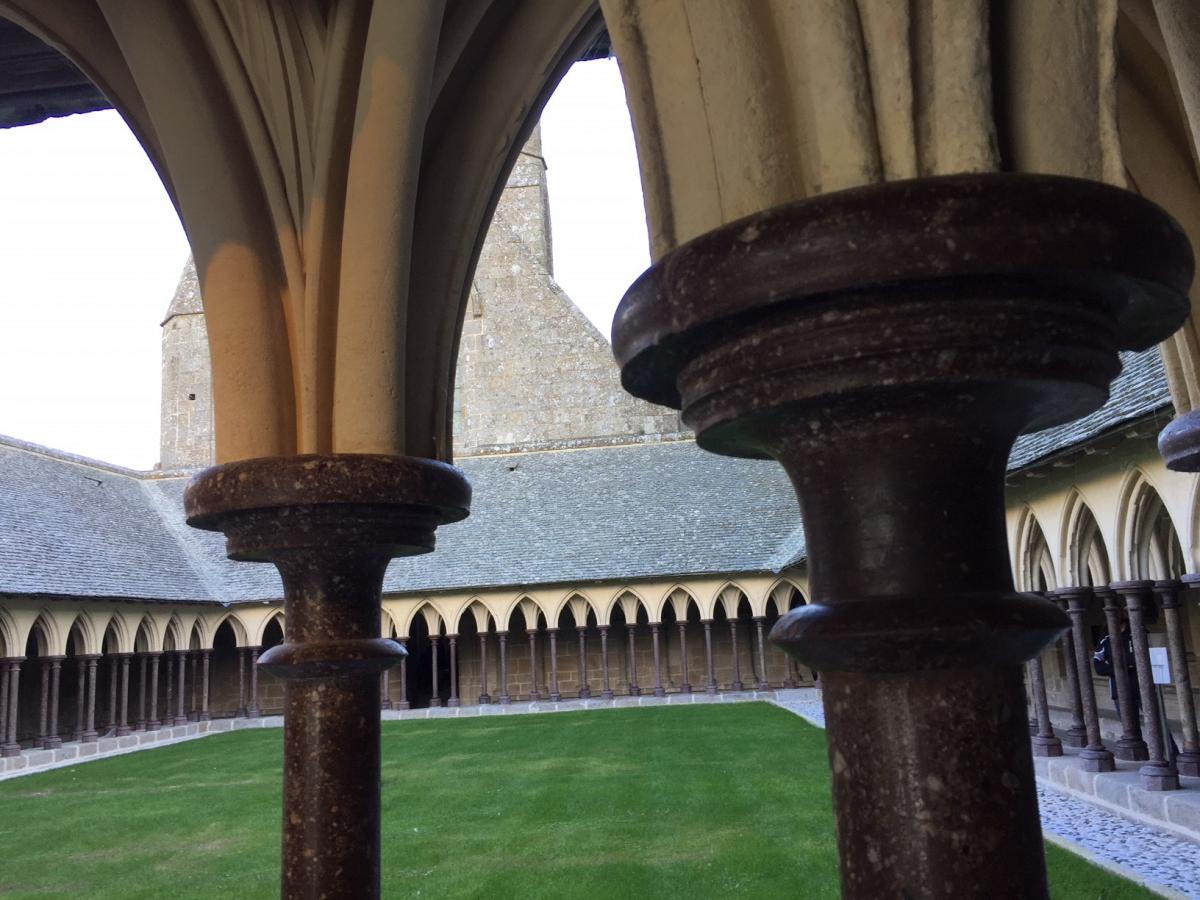 I am sorry that I do not have photos of our group with the expression we wore all day—eyes to the sky, mouths hanging open.

Even here, though, war intruded.  During and for years after the French Revolution, the sacred mount was a prison.  During the Nazi occupation, it was a popular tourist spot for German officers.

Our long trek to the Norman coast produced a particular delight—our tour guide Barbara, a Roman native, shared that she had asked to be with us because her father graduated from UNC-Chapel Hill.  She accepted a Tar Heel hat with enthusiasm and asked for a chorus of the fight song!  Connections happen when least expected.

Wednesday, we docked close to the mouth of the Seine in picturesque Caudebec-en-Caux for a day reserved for fun. A few hardy souls braved brisk winds and threatening skies for a memorable golf game on the cliffs at Entretat, famous from Claude Monet’s paintings.  Most of us explored Honfleur, an ancient harbor town which is now an enclave for art, candy, seafood and the famous calvados brandy made from Normandy’s abundant apples and pears. 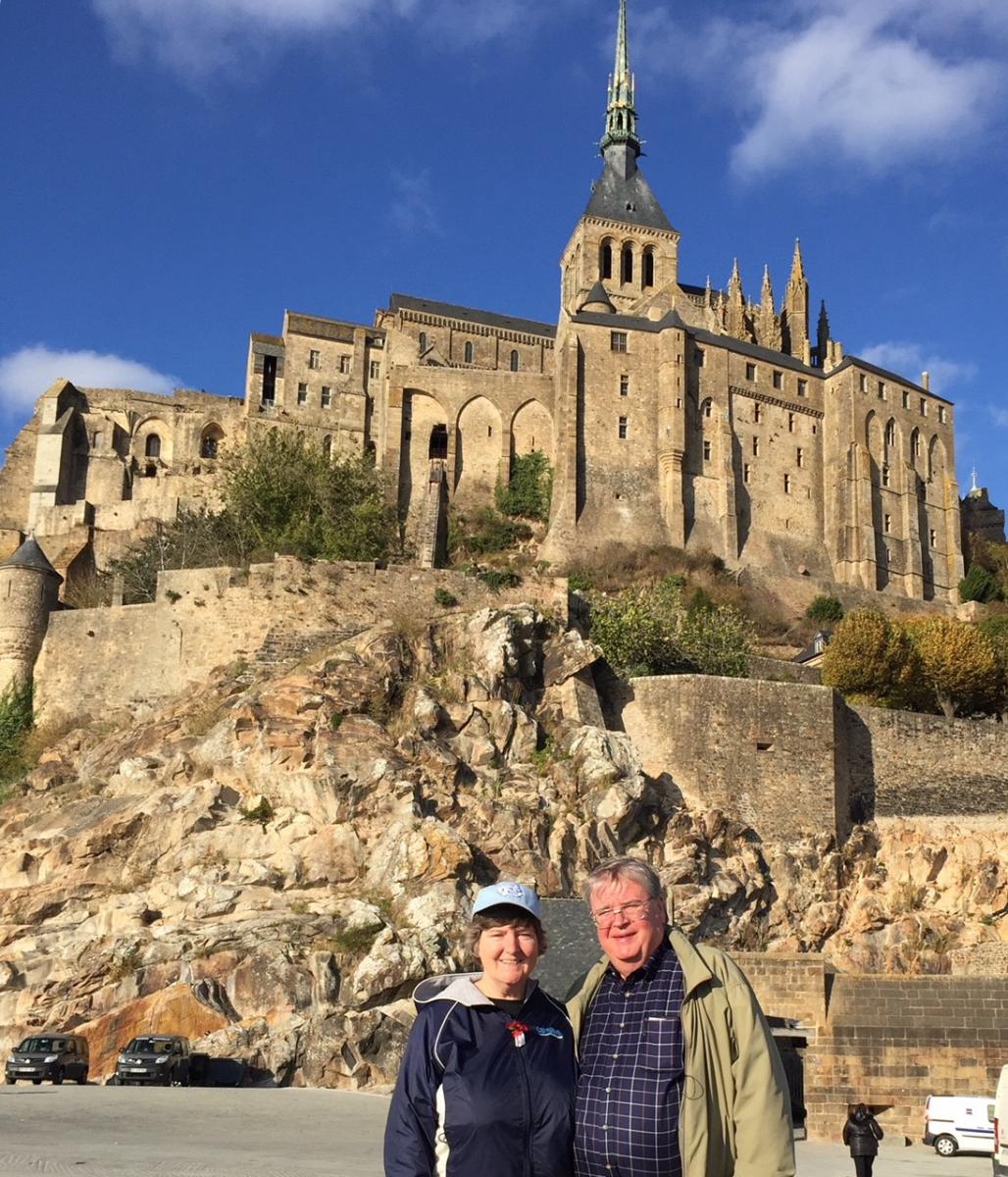 Our excursions in northern France have included many lengthy bus rides.  The most common reaction—especially for those new to France—has been astonishment at the lush beauty of rural France.  Pristine fields and pastures full of spotted Norman cows and sheep nurtured on salt flats attest to the agricultural wealth that underlies France’s prosperity.  Several of our travelers come from North Carolina farm families, and they commented that they had no idea that France’s history was so tied to agriculture. 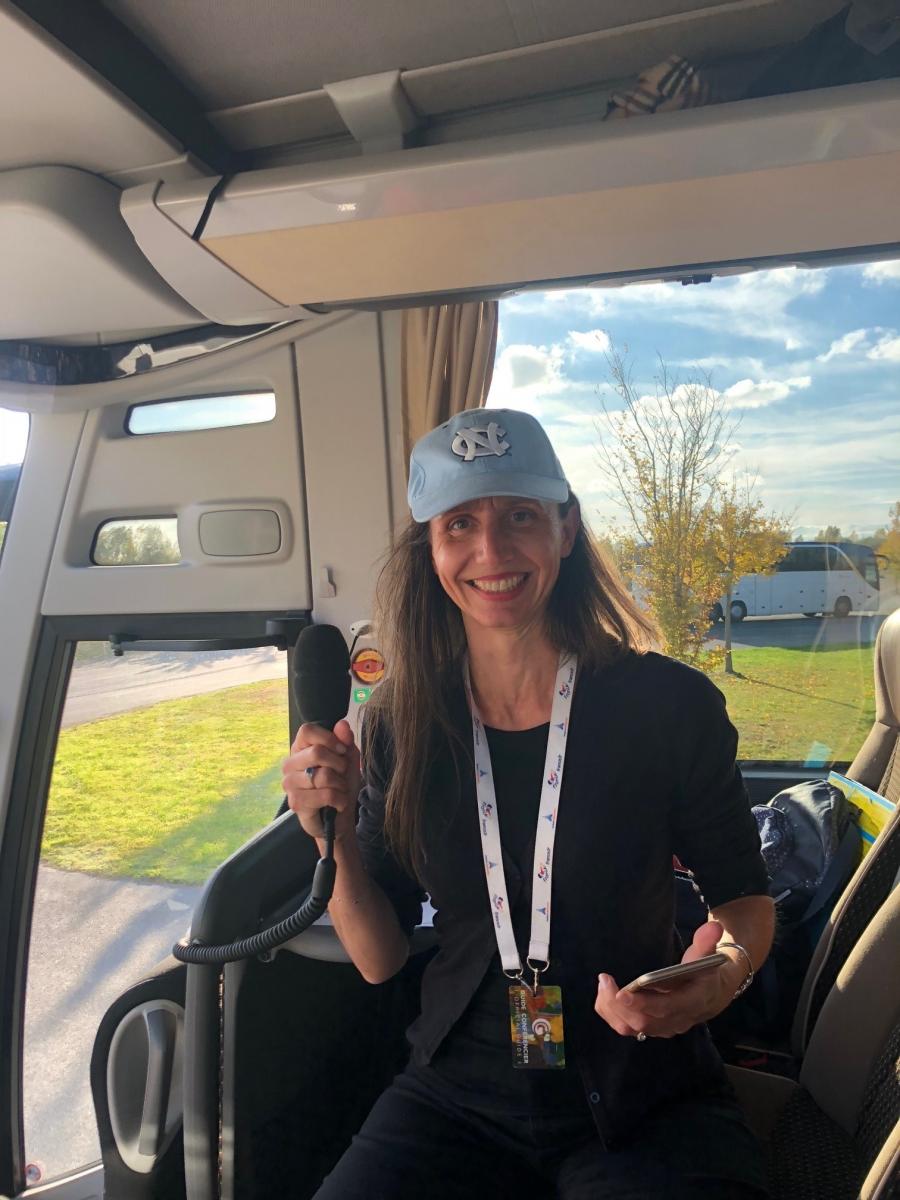 Understanding France’s advantages of geography and climate help with understanding the region’s bloody past.  Who wouldn’t want fertile lands ringed by natural borders of mountains and rivers? 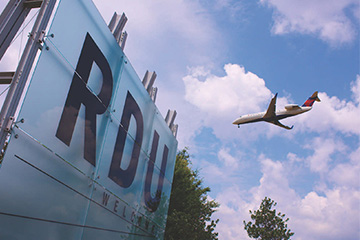 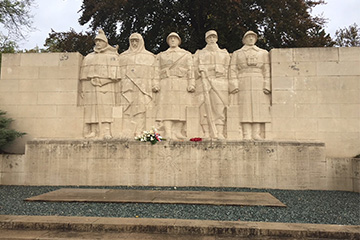 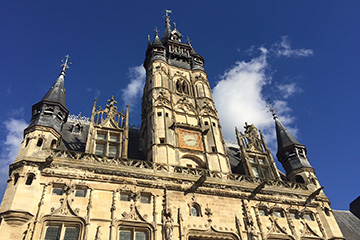 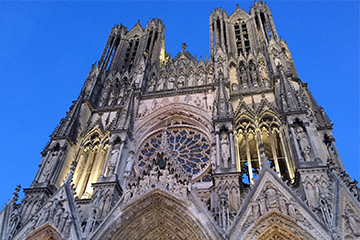 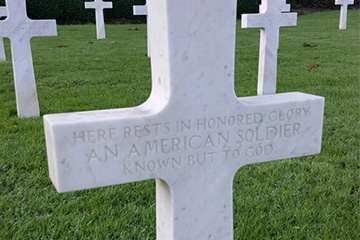 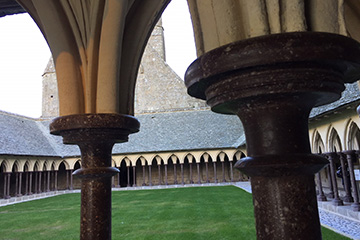 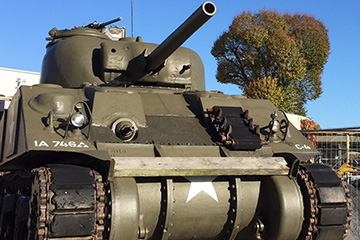 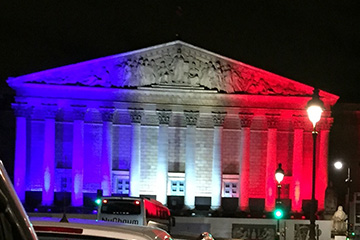 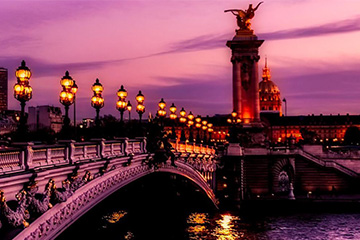