The Gallery Cart for North Carolina Sports Hall of Fame offers visitors an understanding of the differences between athletic uniforms and equipment from the early 1900s and those today.

Developed by the Education Section

History of the Football Helmet

The leather football helmet has its origin more than 100 years ago. It was first worn in an 1893 Army-Navy game. An Annapolis shoemaker created the first helmet for Admiral Joseph Mason Reeves, who had been advised by a Navy doctor that he would be risking death or “instant insanity” if he took another kick to the head. Later in 1896 Lafayette College halfback George Barclay so feared the fabled cauliflower ear on his “hearing organs”, which he felt was a direct cause of playing bare-headed, that he had a playing hat made. His design was a special headgear which was held to his head by three heavy leather straps fashioned by a harness maker, thus giving the first football helmets the nomenclature “head-harness”.

The Golden Era - The helmet as we know it today has undergone many changes in its 100-plus years. Helmets were not mandatory until the 1930’s. Most of the 1890–1915 games were actually played without helmets. It was not unusual to see half of the early players with helmets and half without. Around World War I the helmets were so flimsy that they were often mistaken for aviator caps. Year by year more padding was added and from the 1920’s thru 1940’s, considered the Golden Age of college, pro and high school football—helmets were strictly of leather construction.

Another interesting fact was that nearly all of the games in this era were played in unadorned helmets—school logos colors and mascots were rarely used. As the great rivalries grew colleges and high schools began to hand-paint their leather helmets. The idea was that the simple colors, in the first days of the forward pass, allowed receivers to finally be distinguishable to the quarterback when they were heavily covered and far down the field. Not until 1948 was the first logo, the Rams horns, painted on a pro leather helmet. Soon after, practically every college, pro and high school team put their logos and mascots on their helmets. But the great old leather helmet was spared much of this “clutter” as its days faded into history before 1950.

From Past Time Sports, “History of the Football Helmet,” accessed September 2005, http://www.pasttimesports.biz/history.html.

These football helmets, from the University of North Carolina and North Carolina State University, are made of modern materials to help protect the player from head injuries such as concussions. The N.C. State helmet is a Riddell Revolution Speed Helmet. Using the Summation of Tests for Analysis of Risk (STAR) rating system, this helmet scored five stars, which is the highest score. To test the helmets, the researchers place them on dummy head forms equipped with sensors. A series of laboratory tests are then done on the helmet including dropping it from a tower onto a rubber coated, concrete block. Sensors record the impacts on the head forms and helmets when they hit.  All of this testing has led to safer helmet designs and improvements to the materials used to make the helmets. The majority of football players (college and professional) wear the Riddell Revolution Speed Helmet. Based on the face mask, this helmet was likely worn by a receiver because of the style.

Today, all helmets used in competitive football, from the high school to the professional level, have to be reconditioned and repadded each year to ensure the safety of the players.

If someone has a device with internet access they can view a Riddell football helmet being tested. Here’s the link: https://www.youtube.com/watch?v=XugwfuPXngQ 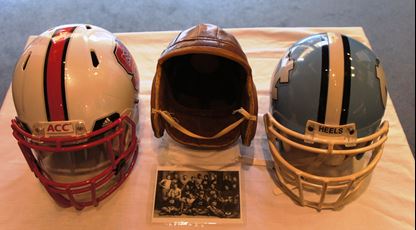 The Baseball Glove Comes to Baseball, 1875

Baseball developed before the Civil War but did not achieve professional status until the 1870s. The Cincinnati Red Stockings became the first professional team in 1869. However, their life was brief and the team went bankrupt within a year of its founding. In 1871 the National Association of Professional Baseball Players was formed and at its peak, consisted of thirteen teams. Unfortunately it too was plagued by financial difficulties and was abandoned in 1875. The following year saw the formation of the National League of Professional Baseball Players (soon shortened to the National League). In 1884 the rival American League was founded and the era of modern professional baseball was begun.

In these early days of baseball, players were expected to take the field without benefit of protective equipment such as a baseball glove or catcher’s mask. The pain of the sport was to be endured without complaint. Any effort to mollify the rigors of the game was looked upon as a sissified attempt to demean the sport.

“He confessed that he was a bit ashamed to wear it...”

A.G. Spalding began playing baseball in the 1860s. He joined the Boston Red Stockings in 1871 and moved to the Chicago White Stockings (today’s Cubs) in 1876. Spalding was the premier pitcher of his day until the physical strain of continuous pitching took its toll and ruined his throwing arm. He founded a sporting goods company initially specializing in baseball equipment and soon branching out to supplying equipment for all types of sports. He never lost touch with baseball and served as president of the Chicago team and one of baseball’s most successful promoters. He was inducted into the Baseball Hall of Fame in its first year.

In 1911, Spalding wrote of his experiences in early baseball and describes his first introduction to the baseball glove:

“The first glove I ever saw on the hand of a ball player in a game was worn by Charles C. Waite, in Boston, in 1875. He had come from New Haven and was playing at first base.

The glove worn by him was of flesh color, with a large, round opening in the back. Now, I had for a good while felt the need of some sort of hand protection for myself. In those days clubs did not carry an extra carload of pitchers, as now. For several years I had pitched in every game played by the Boston team, and had developed severe bruises on the inside of my left hand. When it is recalled that every ball pitched had to be returned,
and that every swift one coming my way, from infielders, outfielders or hot from the bat, must be caught or stopped, some idea may be gained of the punishment received.

Therefore, I asked Waite about his glove. He confessed that he was a bit ashamed to wear it, but had it on to save his hand. He also admitted that he had chosen a color as inconspicuous as possible, because he didn't care to attract attention. He added that the opening on the back was for purpose of ventilation.

Meanwhile my own hand continued to take its medicine with utmost regularity, occasionally being bored with a warm twister that hurt excruciatingly. Still, it was not until 1877 that I overcame my scruples against joining the ‘kid-glove aristocracy’ by donning a glove. When I did at last decide to do so, I did not select a flesh-colored glove, but got a black one, and cut out as much of the back as possible to let the air in.

Happily, in my case, the presence of a glove did not call out the ridicule that had greeted Waite. I had been playing so long and had become so well known that the innovation seemed rather to evoke sympathy than hilarity. I found that the glove, thin as it was, helped considerably, and inserted one pad after another until a good deal of relief was afforded. If anyone wore a padded glove before this date I do not know it. The ‘pillow mitt’ was a later innovation.”

From EyeWitness to History, “The Baseball Glove Comes to Baseball, 1875,” accessed 2004, www.eyewitnesstohistory.com/baseball.htm. 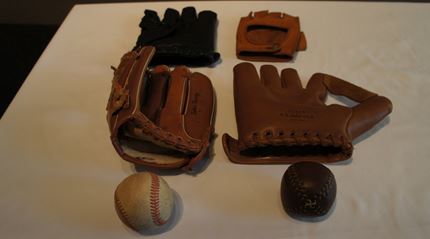 The Story of North Carolina: New Ways to Move at the Turn of the 20th Century | Home | A Call to Arms: Civil War Gallery Cart