The following article is an excerpt from “Legendary Women,” which appeared in Tar Heel Junior Historian 32 (fall 1992), 13–17.

[Another North Carolina] legend is about the Patriot Mary Slocumb at the Battle of Moore’s Creek Bridge. One day in February 1776, she watched her husband, Ezekiel, ride off with a Patriot army toward certain battle. The next night she dreamed she saw “a body wrapped in my husband’s guard-cloak—bloody—dead.” She left her bed, mounted her horse, and rode all night. When daylight came, she had ridden more than thirty miles and had arrived at Moore’s Creek, where she heard the thunder of cannon.

Riding blindly toward the sound of firing, she came to a cluster of trees where about twenty wounded men were lying. One body was wrapped in her husband’s cloak. She uncovered the head and saw a face “clothed with gore from a dreadful wound across the temple.” The bloody face was warm and “an unknown voice begged for water.” She brought him some water, washed his face, and discovered it was not her husband! She cleaned and dressed the man’s terrible wounds, then stayed for hours moving among the other wounded nursing them. Then she described: “I looked up, and my husband, as bloody as a butcher, . . . stood before me.” He had been in a company that had chased the enemy troops across the creek and helped the Patriots win the battle. Knowing her husband was alive, she continued caring for the wounded, and in the middle of the next night, she mounted her horse and again rode alone through the night to reach her home and baby.

The North Carolina Museum of History has a gourd that legend says was used by Mary Slocumb to give water to the wounded when she nursed them through the night at Moore’s Creek Bridge. At the battle site is a statue that honors Mary Slocumb and the other women who bravely helped in the Revolutionary War.

*Tom Belton is curator of military history at the North Carolina Museum of History.

The Birth of a Legend
The inclusion of Mary “Polly” Slocumb’s extraordinary ride in John H. Wheeler’s Historical Sketches of North Carolina, the first major history of the state, signaled the author’s wish to promote North Carolina’s reputation for patriotism. Regional politics were heating up on the eve of the Civil War, and states scrambled to present themselves as models of American ideals.

Wheeler read the story in an 1848 book, American Women in the Revolution, which appeared as the women’s rights campaign began to take shape in the nation. To author Elizabeth Ellet, Mary Slocumb demonstrated the courage and strength of womanhood, struggling on behalf of family and country.

Ellet heard the story from Slocumb’s doctor, who claimed to have heard it “from Polly’s own lips.” Some seventy-five years later, Judge Henry A. Grady used the story in a poem, claiming that the tale had “been traditional in the community where I was reared for One Hundred and Fifty Years.” He told it to promote community pride.

Mary’s legend has since appeared in several collections of North Carolina stories. And people still tell the tale. Which came first, the written or the oral version? We may never know. 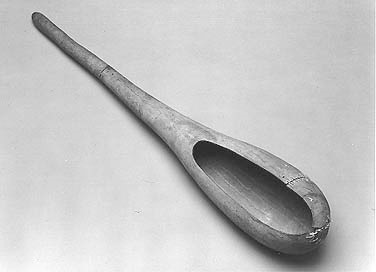 This gourd dipper reportedly hung from Polly Slocumb’s saddle on her famous ride. For many people, the traditional identification of alleged artifacts such as this gourd serves as proof of a legend’s truth.

Did Mary Slocumb Really Make That Ride?
Examine the evidence and decide for yourself.

A history of the Battle of Moores Creek Bridge, including a section on Slocumb’s legendary ride.

It gives me pleasure to announce to Congress that the benevolent policy of the Government, steadily pursued for nearly thirty years, in relation to the removal of the Indians beyond the white settlements is approaching to a happy consummation.

Most Cherokee never believed that removal would happen. When the deadline for voluntary removal elapsed in 1838, only about a thousand Cherokee had left their homelands. Surveyor W. G. Williams, visiting Cherokee lands in North Carolina, wrote that “the Indians in this section are decidedly hostile to emigration.” General Winfield Scott took command of the operation to forcibly remove the remaining Cherokee. General Scott issued a proclamation on May 10, 1838, telling the Cherokee of North Carolina, Georgia, Alabama, and Tennessee to prepare to move west.

General Winfield Scott ordered the roundup and forced removal of the Cherokee to begin in May 1838. Most Cherokee from Georgia, Tennessee, and Alabama left reluctantly but peaceably for Oklahoma territory, embarking on a journey of such terrible suffering that it became known as Nunna dual Tsuny (the Trail Where They Cried), or the Trail of Tears. During the journey, one observer stated that the Cherokee “buried fourteen or fifteen at every stopping place, and they make a journey of ten miles per day only on an average.” Most of the North Carolina Cherokee walked the Trail of Tears, but some refused to leave, taking refuge in their beloved mountains. General Scott ordered troops to find and round up these renegades. One of the fugitives was Tsali.

In October 1838 federal troops rounded up a family of twelve, led by Tsali, in the North Carolina mountains. The family was en route to the removal camp when soldiers mistreated Tsali’s wife. Tsali and his family killed two of the soldiers and fled back into the mountains. Other Cherokee, led by Euchella of the Oconaluftee band, recaptured the family at the end of November and executed Tsali, two of his sons, and his son-in-law. Euchella had made a deal with the United States Army, and his deed enabled all fugitive Cherokee to remain safely in North Carolina. Their descendants became known as the Eastern Band of Cherokee.

Many Cherokee believe that Tsali knew about the deal and gave up his life willingly so that his people could remain in their homeland. His words while he awaited execution lend credence to this theory: “I have a little boy. . . . If he is not dead, tell him the last words of his father were that he must never go beyond the Father of Waters, but die in one's native land and be buried by margins of one's native stream.”

Tsali’s Legacy
The legend of Tsali continues today in many forms, from a play telling his story to signs that bear his name. Tsali is not forgotten, though the details of his legend vary. Read some of the variations 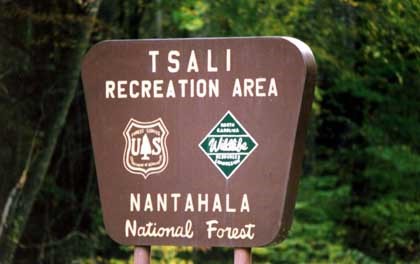 The Tsali Recreation Area, near Robbinsville, Graham County, was named for the Cherokee legend. Photo by Cyd Read of Natural Born Hikers. All rights reserved.

Unto These Hills tells the story of the Cherokee from the tribe’s first encounter with European explorers to the Trail of Tears. The outdoor drama, which has been presented each summer since 1950 in Cherokee, Swain County, includes an account of Tsali’s story. The Eagle Dance is one of numerous dances performed in the production. Courtesy of Unto These Hills.

The Cherokee Legend of “Tsali”
http://www.telliquah.com/Tsali2.htm
A version of Tsali’s story from the Tellico (Tenn.) Plains Mountain Press.

Tsali Legend
http://www.smokymountainnews.com/news/item/10592-the-tsali-legend
A storyteller’s version of the Tsali legend.

Unto These Hills
http://lcweb2.loc.gov/cocoon/legacies/NC/200002910.html
Information on the outdoor drama Unto These Hills—presented every summer at the Oconaluftee Indian Village—which portrays the history of the Cherokee from 1540 through 1838.