This Gallery Cart offers visitors an understanding of the tools and weapons of early American Indians in North Carolina.

Stone ax heads (images of ax heads with handles)
These ax heads are actual artifacts, not reproductions. Although they have become blunt with time and use, the ax heads were never as sharp as those used today. They were used to make large dents in trees, a process known as girdling. The tree would die after girdling and either be burned or rot until the forest could be cleared for farmland. 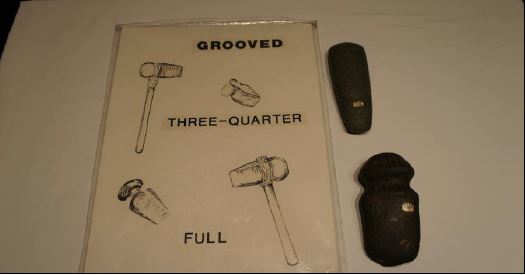 Possible discussion questions:
Why is this ax head so blunt? Indians used the ax heads to girdle, not to chop.
Why isn’t it sharp? It is very difficult to make a stone sharp, and Indians did not have the necessary tools to put a sharp edge on a hard stone. It would be a long time before they had access to metal or had the ability to make sharp tools out of metal.

Bow drill
This tool was used to start fires in the canoe-making process. The first step in making a canoe was to select a tree that was lightweight, soft, and resistant to rot. (The canoe on display is made of cypress wood.) The base of the tree was burned slowly until the tree fell to the ground. To hollow out the log, a fire was started with the aid of gum and rosin. As the log burned, the charred wood was scraped away with shells. 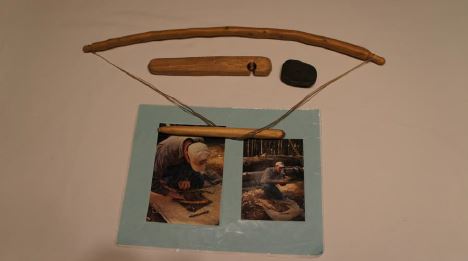 Possible discussion question:
How do you think people started fires before matches were invented?

Teaching tip:
Demonstrate how this process of starting a fire worked. Ask visitors to rub their hands together and feel the heat from the friction. This is how friction fires worked. 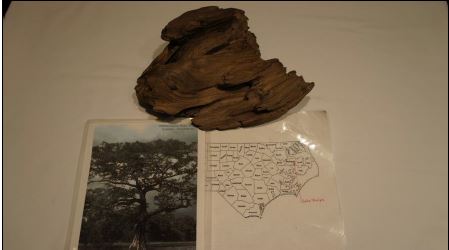 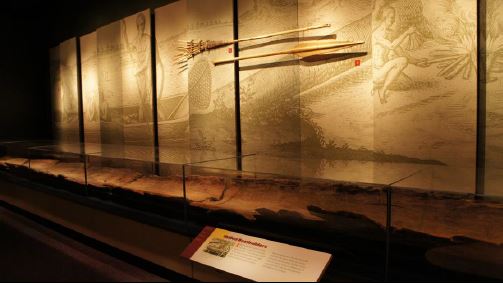 This canoe was one of more than 30 American Indian canoes discovered in 1985 at the bottom of Lake Phelps. The lake is particularly shallow, and the waters are crystal clear. Swans migrate to this natural lake each fall. As they paddle around in the water, they push away sediment. In the fall of 1985, a wildlife biologist, while doing a swan count, observed what appeared to be a canoe sticking out of the lake sediment. It was the bow of the canoe now on display in The Story of North Carolina. This canoe was brought up for archaeological study, but other canoes were left on the lake bed where they receive no oxygen, bacteria cannot set in, and deterioration does not occur. Also, the pH of the water in Lake Phelps is particularly conducive to preservation.

This canoe was the longest one found in the lake, and the wood was very weak. Archaeologists submerged the canoe in a sugar solution to strengthen the wood. After the water evaporated, the sugar recrystallized in the cavities of the canoe. One problem with this method is that the sugar attracts insects, which can damage the canoe. Although the wood appears strong in some places, it is paper-thin and very fragile.

Columella shell bead necklace
This necklace is made from the central column of a whelk shell that was cut, perforated, and ground. Whelks are marine snails common to North Carolina.
Indian tribes in North Carolina had trading relationships with Europeans and often received glass beads in exchange for hides and furs. Before European contact, they used shells, animal teeth, seeds, fired clay, and soapstone to make jewelry.

Both Indian men and women wore necklaces. Men wore them to show their high position in the tribe. The Sauratown Woman figure in the exhibit is wearing a columella shell necklace with a brass gorget ('gor-jet). Gorgets appeared after European contact, as did glass beads like those on the figure’s dress. They also indicated a person’s high status within the tribe.

A bow drill similar to those used in starting fires was used to drill holes through shell beads. A sharp animal bone would have been used as the drill. 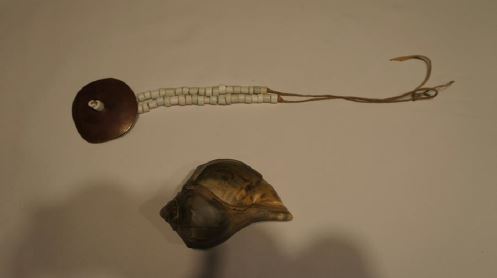 Possible discussion question:
What are some examples of things we wear today to show our importance or uniqueness? (Royalty in other countries might wear crowns, policemen wear badges, and a professional football player might wear a Super Bowl ring.)

Teaching tip:
Direct visitors to the Sauratown Woman figure and ask them to look for another piece of jewelry she is wearing (columella shell bracelet). Allow smaller children to slip on the necklace (on the cart).

Atlatl (image, piece of rivercane and projectile point to represent a dart)
Native Americans used this strange-looking tool for hunting and warfare before the bow and arrow, which was introduced about 2,000 years ago. The atlatl was developed to improve the effectiveness of throwing a lightweight spear or dart. It increased the dart’s force for greater penetration into the hide of large animals like deer. It also increased the range of the dart.

The oldest-known examples of atlatls are more than 20,000 years old. Indians were using atlatls when the Algonquian canoe was made in 700 BCE and when explorers landed on Roanoke Island in 1584.

The three main parts of an atlatl are the HANDLE, the SHAFT, and the SPUR. The atlatl also has a stone weight attached to it. (There is an atlatl weight featured in the exhibit.)

The weight increases velocity and distance. It can be moved around to suit the needs of the person using the atlatl. Darts for the atlatl were made of a flexible piece of rivercane, with a flint projectile point attached to one end and turkey feathers attached to the other end. The darts were much like arrows, but longer. 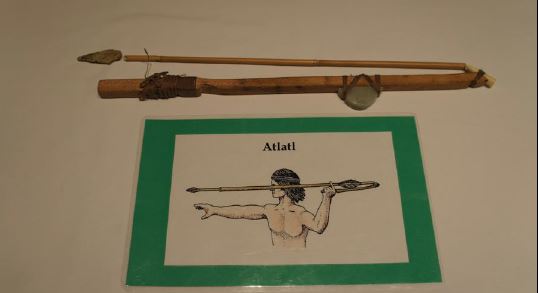 Possible discussion question:
Why was it important to Native Americans to improve their weapons?
(Tribes needed to provide more food for more people. Being able to kill from a greater distance was better and safer in hunting and warfare.)