The Story of North Carolina: Farm Chores in the Early 1800s Gallery Cart

This Gallery Cart offers visitors an understanding of daily chores performed by farm families during the first half of the 19th century.

Growing Your Own Food

The majority of North Carolinians in the early part of the 1800s were yeoman families living on small farms. They ate what they could raise, kill, or gather themselves. Corn was a dietary staple, and most people had access to apple trees. Working in the family garden included plowing, planting, watering, weeding, removing insects by hand, and harvesting the vegetables and preserving them for the winter months by drying or pickling. The entire family was expected to help in the garden. Even the youngest child could help plant and remove damaging worms from the plants.

Have visitors match the seeds with the crop it produces.

Apple seeds and apple
Apples are not native to this continent, but were brought here by colonists from Europe. They were an excellent commodity for early settlers, because they stored well and had many uses.

The climate of the North Carolina mountains—warm days and cool nights—proved the perfect environment for growing firm, crisp, juicy apples. But families across North
Carolina grew apples. Some they ate and some they fed to their farm animals. Most apples were pressed to make cider and vinegar. Both of these items were very important. Cider was a beverage that kept for a long time without spoiling. (Remember, there was no refrigeration at this time.) Apple Cider Vinegar was used to preserve foods that could be eaten during the winter. All sorts of vegetables were pickled with salt and vinegar brine. Vinegar was also commonly used as a cleaning agent in the home. It was quite effective at cutting through grime and grease on windows, tables, floors, and other surfaces.

Early apples did not look like the shiny, perfectly shaped apples we see in grocery stores today. Some were small with uneven shapes and rough or spotted skin. But their flavor was more important than how they looked. These older varieties of apples are called heirloom apples today. Many old varieties have disappeared over time, but there have been efforts to find old trees and keep them producing. Horne Creek Living Historical Farm is the home of the Southern Heritage Apple Orchard, a preservation orchard containing 400 varieties of apple trees that once flourished in North Carolina. Horne Creek is a North Carolina state historic site located in the small town of Pinnacle, just north of Winston Salem.

Tobacco seeds and tobacco leaves (Cash Crops)
Tobacco seeds are so tiny that they are not planted directly in the field, but are germinated in greenhouses or in covered beds in the early spring. Seedlings are then transplanted to the field in May or early June. (A laminated photograph is included that shows a close-up view of a tobacco seed.)

Two types of tobacco are grown in North Carolina—bright-leaf tobacco is grown in the eastern counties and Piedmont, and burley tobacco is grown in the western counties. The main difference between the two types of tobacco is in how they are cured, or dried, after being harvested. Bright-leaf tobacco is flue-cured. Individual leaves are picked from the tobacco stalk, tied in bunches onto sticks, and hung in a barn. A fire is lit in a furnace, and flues radiate the heat through the barn for about a week, drying the tobacco and turning it a golden color.

Burley tobacco is air-cured. The entire stalk is cut, and the stalks are stacked together in shocks in the fields. The shocks are then collected and hung in large open barns, where the air circulates around them to cure them. After about eight weeks of curing, burley leaves will turn a light brown or mahogany shade.

Cotton seeds and cotton
Cotton grows inside a fruit bud, called a boll. The seeds are inside the fluffy cotton fiber. Before the invention of the cotton gin by Eli Whitney in 1793, the seeds were removed 14 from cotton by hand after the cotton had been picked from the boll. Because removing the seeds was such a long and labor-intensive process, cotton was not a popular crop to grow. But Whitney’s cotton gin removed the seeds mechanically. With its introduction, cotton quickly became one of the main crops planted in North Carolina and across the South.

Corn and seeds
The first Europeans to come to North Carolina observed American Indians growing and eating maize, or corn. In the 1700s English explorer John Lawson wrote: “The Indian Corn, or Maiz, proves the most useful Grain in the World; and had it not been for the Fruitfulness of this Species, it would have proved very difficult to have settled some of the Plantations in America.” Lawson depended on corn for food during his travels through the North Carolina Piedmont, “having nothing but that to subsist on for above 100 miles.”

North Carolina Indian tribes grew two varieties of corn. The hard type was used in cooking many dishes, and the softer type was ground into flour with a mortar and pestle.
American Indians dried, steamed, boiled, roasted, baked, and broiled corn. They also made bread, popcorn, soup, and even a drink. Today North Carolinians of all ethnicities include corn in their diets, preparing it in many of the same ways American Indians did in the past. Corn can be grown in all regions of the state, but it grows best in the soil and climate of our Coastal Plain. 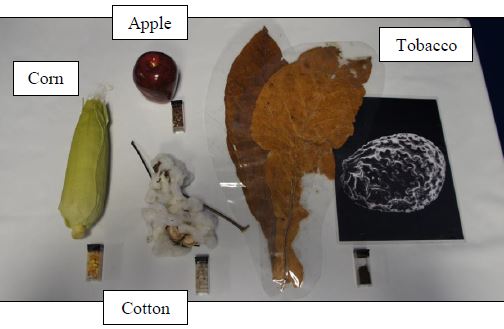 Using Horsepower to Help with Chores

Horse bit
Horses, mules, and oxen were extremely important animals on a farm. These draft animals were needed to pull plows in the fields and draw wagons full of crops to market. They also helped clear land for farming by hauling sleds of cut timber and pulling stumps from the ground. Draft animals were valuable assets and required daily maintenance. Every family member helped take care of them and keep them healthy

In the early 1800s, most North Carolinians recognized a horse bit and understood its importance. A bit, also called a snaffle bit, is a mouthpiece connected by rings to a bridle and reins. A rider uses a bit to communicate direction to a horse. There are many different types of bits.

This bit is known as a straight-rod bit and is commonly used in western-style horseback riding. It rests on the back gums and across the tongue of the horse, thus not causing harm to the animal, but the rider can apply enough pressure to signify commands.

Hog scraper
Hogs were usually butchered on a cold day in November or December to prevent contamination from flies or spoilage of the meat from heat. They were penned up and fed corn and other grains for the last few weeks before butchering to fatten them up. Corn also helped improve, or sweeten, the flavor of the meat.

After a hog was killed and bled, it was scalded in a large wooden trough filled with boiling water to loosen the hog’s hair and make it easier to remove. The hog was then
placed on a sturdy table, where the hair was scraped from the hog’s body using a scraper like this one. Once the hair was removed, the hog was hung from a tree or tripod by the back feet. The belly was cut open, and all the organs were removed. The intestines were cleaned, to be used for sausage casings. The carcass was then split in half and cut into parts to be processed into hams, loins, chops, sausage, livermush, headcheese, pickled pig’s feet, bacon, lard and other items.

Butchering day was often a community experience where families and neighbors gathered together to share the work, enjoy each other’s company, and teach children a skill they would need in the future. Everyone in the family helped, and community was a necessity when there was so much hard work to do to put food on the table. 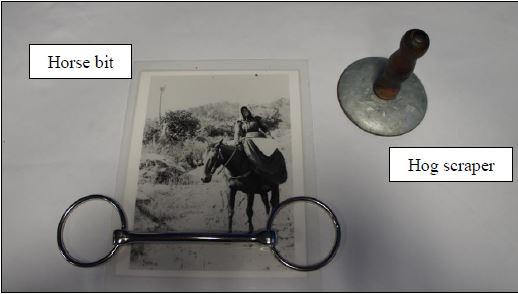 Lye soap
For many farm families in 1800s North Carolina, soap making was a necessity because they were not able to easily travel to market to purchase soap, nor did they often have the money to purchase it. Families usually made soap in the fall months after butchering season, when they had plenty of fat from hogs. They cooked the fat down to make lard. To the lard they added lye made from wood ash. Lye water was then carefully added to the hot, melted lard. This process neutralized the lye, making it safe to use. The concoction was cooked outside for hours in a large kettle over a fire until it began to harden. The soap was molded and allowed to dry before being cut into bars. Additional curing time made the bars of soap hard and dry. The entire process took a very long time, but was usually done only once a year.

Homemade soap could be gentle or harsh, depending on the amount of lye added to the lard mixture during the cooking process. Lye soap was used to clean everything from hands, bodies, and hair to clothes, floors, and dishes.

Washboard
A washboard is constructed of a series of horizontal metal ridges held together by a wooden frame. This washboard is quite small and would probably have been used to wash small items such as gloves or socks. Washing day in a large household involved hard manual labor, often completed by women and older children. Laundry was first soaked in hot, soapy water over a fire. Excess water was wrung out of the clothes by hand, and the items were transferred to the washboard, where they were scrubbed against the metal ridges so the soap could better work into the fabric. The items were then rinsed and hung to dry.

Battling stick
If you didn’t have a washboard, you could use a battling stick to wash laundry. The dirty laundry was first soaked in hot, soapy water, then wrung out and placed on blocks of wood or a log. A battling stick was used to beat the clothes until they were clean. This method of washing was physically exhausting but necessary if a washboard was unavailable. 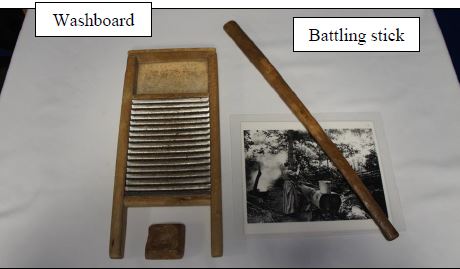 Stoneware butter churn with salt glaze
The butter churn is a hand-operated appliance used to create butter from milk cream. It has two parts: a plunger, called a dasher, and a container, called a churn. Cows were typically milked daily. The milk was set aside in a bucket after each milking so that the cream could rise to the top. Churning cream into butter took from 30 minutes to several hours, depending on the temperature of the cream.

Families churned butter according to their needs—from once a week to every other day. Many butter churns are constructed of wood, but this one is glazed stoneware with a wooden dasher. Stoneware churns were common in the late 1800s and used in many households until the advent of less expensive tin and glass churns.

Butter mold with stamp
Butter molds were used to form and decorate butter. Butter was pressed into the mold and then forced out with a decorative plunger or stamp. The stamp, which was first placed in cold water to minimize sticking, impressed the design on the butter. Stamps were hand carved into a variety of plant, animal, and patriotic designs. They sold for 5 to 10 cents each. Butter that was made to sell was often stamped to identify the maker. 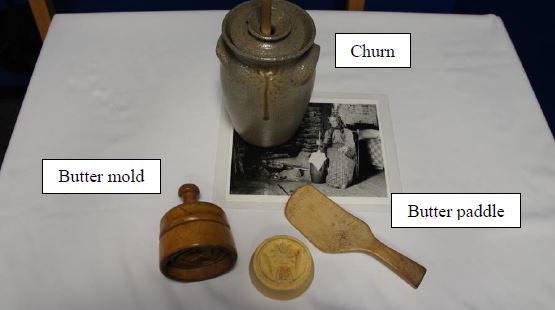