This Gallery Cart offers visitors an understanding of the importance of the production of naval stores—tar, pitch, turpentine, and rosin—to the early colony of North Carolina and the lasting impact the naval stores industry has had on our state.

How Do You Recognize a Longleaf Pine?

Objects: pinecones, picture of pine needles, ruler for showing and measuring the length of a needle; maps showing pine forest range in 1800s and today
(Show picture and use a ruler to indicate the length of one needle.)
(Show pinecones and let visitors measure them).

The longleaf pine, sometimes called the southern yellow pine, is our state tree. Longleaf pines are tall, stately trees reaching 80 to 100 feet in height. They take 100 to 150 years to reach maturity and can live 300 years. They grow best in flat terrain and sandy soil that is nutrient poor.

The needles of the longleaf pine are dark green and grow to from eight to 18 inches in length. (Use a ruler to measure the length of one needle). The fruit of the tree is a large woody cone that measures from six to 10 inches long. The cone contains the seeds. 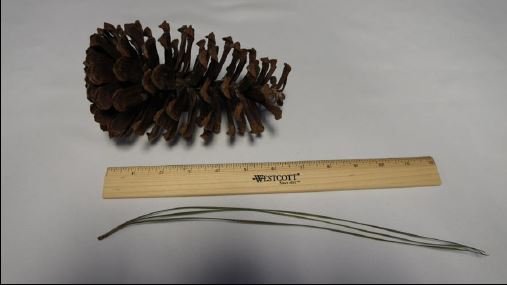 Where Did Longleaf Pines Grow in the Early Colony of North Carolina?

When Sir Walter Raleigh convinced Queen Elizabeth I to finance exploration of the New World, he may have hoped to find the type of trees that produce naval stores. Two of the men on Raleigh’s first expedition in 1584, Philip Amadas and Arthur Barlowe, wrote about seeing pine trees on Roanoke Island:

There are those kinds of trees which yield them [pitch, tar, rosin, and turpentine] abundantly and great store. In the very same island where we were seated, being fifteen miles of length, and five or six miles in breadth, there are few trees else but of the same kind, the whole island being full.

So it was apparent that the colony of North Carolina could provide large amounts of naval stores to help the British Navy build and maintain their huge number of ships. England had the largest navy in the world at this time.

The southern colonies had longleaf pine forests that covered 90 million acres. This included nearly all of North Carolina’s Coastal Plain and much of the southern Piedmont. (Show map.)

Why Were Tar, Pitch, and Turpentine Important to the Economy of North Carolina?

The British government encouraged the production of tar and pitch because it could get these products more cheaply from the colonies than from Sweden. The British navy needed large amounts of tar to waterproof ropes on ships. Pitch was used for caulking and painting the hulls of ships to make them waterproof. Turpentine was made into oil paint, which was used primarily to paint ships as well as the exteriors of buildings. These three products became a major source of income for the colony before the Revolutionary War.

Enslaved labor was most certainly used in this industry from the earliest years until after the Civil War. Renowned landscape architect Frederick Law Olmsted recorded his observations of the turpentine forests and the people in the turpentine industry in the southern states during the 1850s. He wrote:

"The negroes employed in this branch of industry, seemed to me to be unusually intelligent and cheerful. Decidedly they are superior in every moral and intellectual respect to the great mass of the white people inhabiting the turpentine forest. Among the latter there is a large number, I should think a majority, of entirely uneducated, poverty-stricken vagabonds.”

Olmsted goes on to explain that these “vagabonds” are poor white people, owning almost no property who regularly hire themselves out as laborers to work in the industry when they need some money. He also says that the turpentine farmers do not like to employ them because they cannot be relied on to finish the jobs they are given, and that their labor is even more inefficient and unmanageable than that of slaves. Because they are white, the farmers cannot “drive” them or force them to work harder.

Enslaved laborers, both men and women, were used in all aspects of the turpentine industry. They worked in the forests collecting the gum, operating the stills, and cooking for all of the crews. By the 1840s, enslaved male workers were being trained as coopers to meet the demand for the thousands of barrels needed for transporting turpentine. Coopers’ were paid wages. Those wages were usually higher than the average turpentine worker’s. (Show barrels in the exhibit.) Overall, turpentine work was hot, dirty, and dangerous, attracting only poor whites and enslaved blacks.

What Is a Tar Heel?

Many historians believe that North Carolina became known as Tar Heel State because of the importance of tar production. The men working with pine trees and the sticky gum and tar would almost certainly have found themselves with plenty of the goo on the soles of their shoes or possibly on their bare feet. The term “tar heel” was considered derogatory early on. It indicated that a person was either an enslaved black or a poor, uneducated white. Today, however, North Carolinians look at the nickname with a sense of pride and an understanding of its origin.

Object: picture of a tar kiln

Tar is a dark, thick, sticky liquid produced by burning pine branches and logs very slowly in kilns. One early observer noted that the process was like roasting the wood. As the wood burns, the resin flows out of the wood and into troughs that carry it to a barrel to collect. (Use existing pictures in the gallery.) Tar was needed in the early Carolina colony to waterproof the ropes of ships. It was also used to grease wagon axles, to preserve wooden fences, and to treat wounds on farm animals like cows and horses to help speed healing. Much later tar was used to cover roofs and to build roads.

Pitch is produced by boiling tar to make it more concentrated. It is almost solid at room temperature, but when heated it flows like a liquid and can be used like paint. Pitch was painted on the sides and bottoms of wooden ships to make them watertight. It was also used to plug holes or to caulk between the wooden boards of a ship’s hull.

What Are Turpentine and Rosin?

Object: picture of a turpentine still

Turpentine is distilled from a gum that living pine trees secrete to protect wounds or cuts in their trunks. If you’ve ever pruned a pine tree, picked up a broken pine limb in the yard, or put up a live Christmas tree, you’ve experienced the sticky gum that is so hard to wash off of your hands.

To make turpentine, the trees are cut to allow the sticky gum to flow out of the tree into a basin attached to the tree. The gum, is put into large copper kettles, water is added, and the mixture is heated over a fire. The vapor from the boiling gum is condensed in a copper coil, and the liquid produced is turpentine. This process is almost identical to the process of distilling whiskey. Turpentine was used in making paint and various medicines. It is highly flammable and was also once used as lamp oil. Two byproducts of the distilling process are a thick, clear residue called rosin and a darker residue called dross.
Extracting tar and pitch from pine trees

Extracting tar and pitch from pine trees involved using fire. The process of distilling the gum from the trees also involved the use of fire and open flames. The turpentine oil in the raw materials is very flammable, making this industry extremely dangerous to the people working around the kilns, pitch pots and stills. Twenty turpentine distilleries were destroyed by fire in the Wilmington area from 1842 to 1853, and the loss of stills from fires continued well into the 1900s.

The longleaf pine still grows in North Carolina today but in much smaller numbers. The naval stores industry killed many of the trees. Others were lost when dense settlement during the 1800s caused longleaf pine forests to be cut down to clear land for houses. Farmers who allowed their hogs to roam freely in the forest to forage for food also had a hand in reducing the number of trees. The hogs ate the cones of longleaf pines and rooted up seedlings, preventing the trees from replacing themselves. 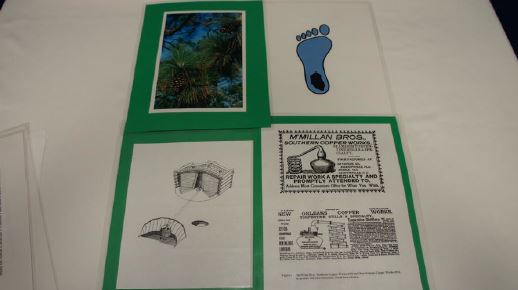 How Are Tar, Pitch, Turpentine, and Rosin Used Today?

Did you know that you may be using items every day that contain tar, pitch, turpentine, or rosin? For many years people have used tar and turpentine for medicinal purposes. Even today we still find products with these ingredients. Vicks VapoRub, invented in Greensboro by a pharmacist, contains turpentine. (Let visitors smell the Vicks.) Apinol, an all-purpose pine oil antiseptic, was invented in 1903 in Wilmington by the Hugh McRae family. Liniments for mild cuts and abrasions also contain turpentine and can be used on people and animals. Oil of pine tar has been used to treat mange (a skin condition) on animals, and turpentine has been used for years to rid dogs of fleas. Pine tar soaps have been used to treat many types of dermatitis such as eczema and psoriasis, and some dandruff shampoos contain tar. Other uses for pine tar soap include soothing the itch of poison ivy rash and repelling mosquitoes, chiggers, and ticks.

One of the more interesting uses of pine tar is found in the game of baseball. Batters have long used pine tar to improve their grip on the bat, keeping it from slipping in their hands in humid or wet weather. Pine tar is available as a gel that is rubbed on the bat and also as powdered rosin inside a cloth bag. A batter taps the rosin bag along the handle of the bat to coat it. The major league has strict rules as to how high on the handle pine tar can be applied. The umpire can remove the bat from the game if that rule is violated.

If you play a bowed stringed instrument like the violin, you are probably familiar with the use of rosin on the bow hair. Rosin is added to the bow hair to make it grip the strings of the violin, reducing friction between the bow and the strings and making a better sound. 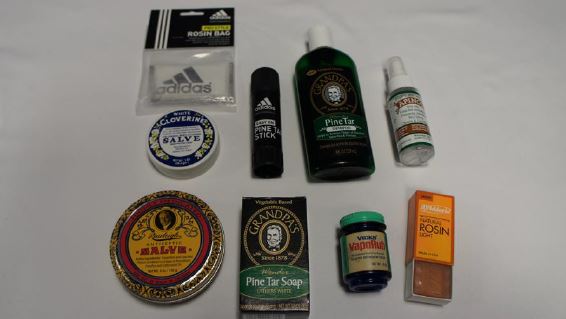