This gallery cart will offer a better understanding of the Stamp Act of 1765 and the Tea Act of 1773 and will focus on why these two acts led to angry, political activism throughout the original colonies and helped lead, eventually, to outbreak of the Revolutionary War.

Stamp Collecting in the 18th Century was not a popular hobby!The American Revolution didn’t just start overnight. It was caused, in part, by a series of laws that were passed by the king and government of Great Britain between 1763 and 1774 to regulate trade and taxes here in the American colonies. In 1763 Britain finally ended the Seven Years’ War against France (our own French and Indian War, from 1754 to 1763, and the War of the Conquest, a conflict in Canada from 1756 to 1763, both were parts of the larger Seven Years’ War).

As a result of the Seven Years’ War, England gained enormous areas of land around the world, as well as more property in the colonies, but they also gained very heavy debts. To recover those debts, the crown needed money, and British Prime Minister George Grenville proposed a “stamp tax” to generate revenue for the government. This particular stamp tax would require American colonists to pay a tax through the purchase of a government-issued stamp for all printed paper goods, including legal documents, business records, licenses, and newspapers—even playing cards and wallpaper. Stamps were to be placed on papers to serve as proof of payment.

As soon as Parliament in London passed the bill, problems started in the colonies. Many colonists did not mind the actual cost of the stamps (partly because they were told that some of the receipts would be used to defend part of the newly won American frontier near the Appalachian Mountains), but they saw the action itself as a dangerous precedent: the British king and British Parliament taxing the colonies without the colonies having any input. If this new tax was allowed to pass without resistance, the colonists feared more taxation in the future.

Image of a sheet of stamps
A proof sheet of one-penny stamps, submitted for approval to the Commissioners of Stamps by an engraver on May 10, 1765. Under the Stamp Act, one-penny stamps were to be used on newspapers, pamphlets and all other papers that measured “larger than half a sheet and not exceeding one whole sheet.”

Image of individual stamp
A tax stamp used in accordance with the 1765 Stamp Act. What do the initials GR stand for? G is for George (King George III) and R means “Rex,” the Latin word for King.

When news of the Stamp Act reached American colonists, they immediately showed their anger. Many believed that direct taxes should only be levied by their own governments or that they should only be taxed by a government in which they were represented. They considered this Stamp Act to be “taxation without representation.”

The colony of North Carolina seemed to be very much opposed to the Stamp Act. When one British ship arrived in the colony with tax stamps from England, the colonists refused to let them be brought ashore. A few months later, the British navy seized two American ships in the Cape Fear River because they were sailing with unstamped papers. Before long, 1,000 armed colonists forced release of the ships and their crews by threatening violence. Royal Governor William Tryon even discovered, with great frustration, that his own magistrates and other law enforcement officials were actually joining protesters instead of trying to stop them!

In less than one year, the British government finally said “enough” to the protests and repealed the Stamp Act. The situation in the colonies calmed, as a result, for a time, but other serious, on-going problems began to fester between Great Britain and the American colonies—problems that would only get worse. One of those problems peeked a few years later in the form of another tax, part of the Townshend Acts, that was placed on the colonies and once again put the colonists at arms against the king. 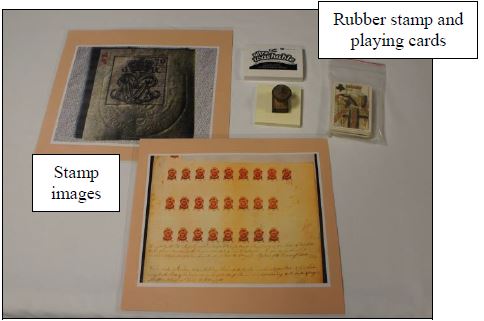 Why all the fuss over tea?
About 5,000 years ago, legend says that a Chinese emperor was sitting under a tree, heating water to drink, when some leaves blew into the hot water. The emperor drank the soiled water for some reason—and, he liked it! Soon tea leaves were being harvested and, by the 1600s, they were being sent from China to countries around the world, including England, and, by the 1700s, to the American colonies.

Object: Silk Road Map
Shows routes of the Silk Road from China to England and eventually shipping routes to America; emphasis here should be placed on how far tea leaves had to be shipped—a distance that made them expensive, but also exotic and highly prized. 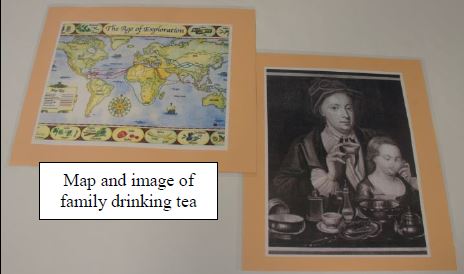 By the 1600s, tea was in demand in England, not only for its taste but because it was believed to have health benefits. One gentleman described tea in 1658 this way:

In the year 1600, British businessmen formed a company to import goods—like spices, silk, and tea—from southern Asia, or “the East Indies,” as the area was called then (besides China, the term referred to areas around modern-day Malaysia, Philippines, Sumatra, Borneo, and New Guinea). Their company was named the British East India Company. Unfortunately, even with a reliable importer, the popularity of tea in England kept the price very expensive, and few could afford to drink it. In addition to that “natural” price, beer brewers in England did not like the sudden popularity of tea out of fear the competition would cost them some of their market. Their response was to use their considerable influence to have a heavy tax imposed on tea coming into England, which would make it even more expensive to consumers.

Still, the demand for tea continued to grow, and soon merchants started smuggling tea into England and the American colonies to supply those demands and avoid paying the high tax. When the British East India Company slowly accumulated stockpiles of legally imported but heavily taxed tea that they couldn’t sell, the British government tried to help the company by passing the Tea Act of 1773. The Tea Act lowered taxes on tea that passed through Britain and forced the American colonies to buy tea exclusively from the British East India Company. Reducing, or eliminating, the middle taxes did reduce the price of tea in the colonies, but colonists were suspicious of the tea monopoly created when the Tea Act gave the British East India Company complete control over tea inventories and sales in the colonies. They also objected to the act’s continuation of a previous tax that had been imposed as part of the Townshend Acts.

While consumers here in North Carolina appreciated the suddenly lower price of tea, people throughout the American colonies reacted to the monopoly in surpising ways. Everywhere, colonists refused to buy or drink tea that had arrived from England. In some port cities, the British East India Company’s ships were not allowed to dock and unload their tea. In others, ships were forced to stay in the harbor, causing their cargo of tea to rot. In the port of Boston, on December 16, 1773, a group of men boarded tea-laden ships, smashed the chests of tea, and threw the tea into Boston Harbor. This act became known as the Boston Tea Party.

North Carolina had its own “tea party” when, in October 1774, several prominent women of Edenton met at the home of Elizabeth King for the purpose of endorsing a set of resolves, passed by the First Continental Congress, against importing British products such as clothing and tea. Penelope Barker presided over the meeting, which resulted in the “Edenton resolves”—bearing the signatures of 51 women.

Open acts of defiance continued to take place in all of the colonies, and England tried to enforce the act and control the situation. But, a little over a year after the Tea Act was passed, the war for American independence began: on April 19, 1775, British troops and American colonists clashed at Lexington and Concord.

Copy of petition
Letter of unknown author printed in the Morning Chronicle and London Advertiser, January 31, 1775. Reprinted by the Edenton Woman’s Club in Historic Edenton and Countryside (Chowan Herald, 1959), pp. 3–4.

British cartoon of the Edenton Tea Party
This British cartoon satirizes the fifty-one “patriotic ladies” of Edenton, North Carolina, in their attempt to endorse the nonimportation association resolves of 1774. Drawn by Philip Dawes, it was titled “A Society of Patriotic Ladies, at Edenton in North Carolina,” appeared in a London newspaper on March 25, 1775.

This British cartoon satirizes the 51 “patriotic ladies” of Edenton who endorsed the First Continental Congress’s nonimportation association resolves of 1774. Drawn by Philip Dawes, it was titled “A Society of Patriotic Ladies, at Edenton in North Carolina” and appeared in a London newspaper on March 25, 1775.

Look closely at the image. What is happening? Notice the women on the left who seem to be emptying their tea caddies into a bowl. Another woman in the background seems to be drinking directly from a punch bowl like the one in our exhibit. Punch bowls were usually used to serve alcoholic beverages at this time in history. And drinking directly from the bowl would be considered very bad manners! The woman with the “big hair” on the right is actually a man! He is the Earl of Bute who had been a tutor to King George III when he was a young boy. Lord Bute later served as Prime Minister of England. Many people believed that he had a secret influence over King George and blamed him for royal policies they disliked. Lord Bute was regularly made fun of in cartoons, songs, plays, and newspapers. He was even attacked by mobs and threatened with assassination. The baby under the table seems to have a dog pulling its ear. And can you tell what the dog is doing to the tea chest on the floor?

What does the cartoonist think of the Edenton “Tea Party”? Of the Revolutionaries? Of women’s “proper” role?

Loose tea in a clear container
Loose tea like this would have been shipped to the American colonies in wooden chests or boxes lined with tin or lead.

Porcelain tea caddy
In the home, loose tea was stored in metal, glass, silver, or china containers. Early wooden “tea boxes” usually came with a lock and key because the tea was so valuable. Smaller tea storage devices were made of porcelain, and many came from China.

Caddy spoon or ladle
Loose tea was poured from the caddy into a caddy spoon, then dumped into an empty teapot. Boiling water was then poured into the teapot, over the leaves, and the liquid was allowed to steep.

Tea pot
After letting the tea steep in boiling water in a teapot like this one, the hot tea was poured through a strainer into cups. 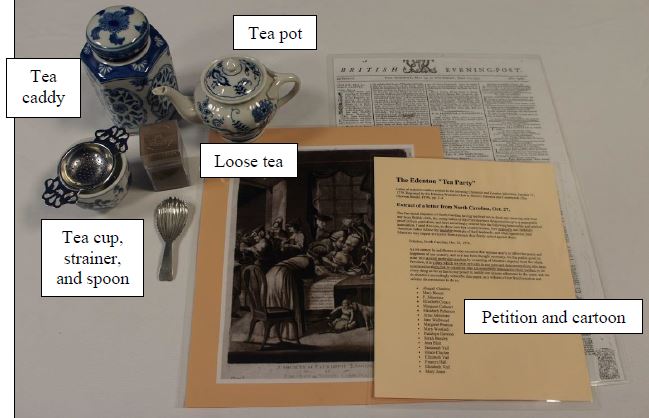