Primary sources can make valuable learning tools for students. They will be examined here using examples related to women’s history

What Is a Primary Source?
A primary source is an account created by someone who participated in or witnessed an event. Primary sources can include diaries, birth and death certificates, letters, speeches, drawings, photographs, marriage licenses, archaeological artifacts, objects associated with individuals, cartoons, newspapers, yearbooks, posters, signs, and memoirs.

Why Are Primary Sources Important?
Primary sources reveal personal information rarely contained in books and articles of the time. They offer students a direct link to the lives of people in the past. According to the National Archives and Records Administration, students encounter important historical concepts and develop valuable analytical skills by using primary sources.

Students sometimes see history as a series of facts, dates, and events, usually packaged as a textbook. As they use primary sources, they begin to view textbooks as historical interpretations. They realize that any account of an event, no matter how impartial the presentation, is essentially subjective. 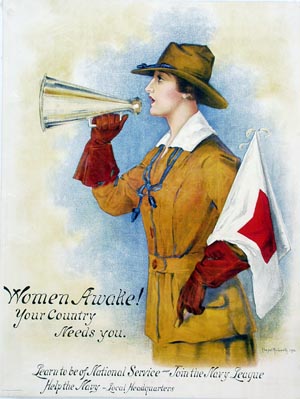 This colorful World War I propaganda poster urges women to help with the war effort: "Women Awake! Your Country Needs You. Learn to be of National Service – Join the Navy League. Help the Navy – Local Headquarters." The poster is included in the collection of the North Carolina State Archives and is one type of primary source.

Photographs as Primary Sources
Like other kinds of documentary artwork, photographs tell us much about the past. Beyond showing what something or someone looked like, they reveal the values of the photographer, the subject, the time period, and even the community.

For example, formal family portraits often reflected the ideals or tastes of the time. Examine a family portrait. Is the setting plain or fancy? Does the backdrop have an exotic scene painted on it? What props are used? What kind of clothing are the subjects wearing?

The angle of a photograph gives clues to what the photographer or subject wanted to convey. Buildings or people were often photographed from below rather than straight on. This view transmitted the subconscious message that the subjects were important. Conversely, subjects could be photographed from above to emphasize their insignificance. 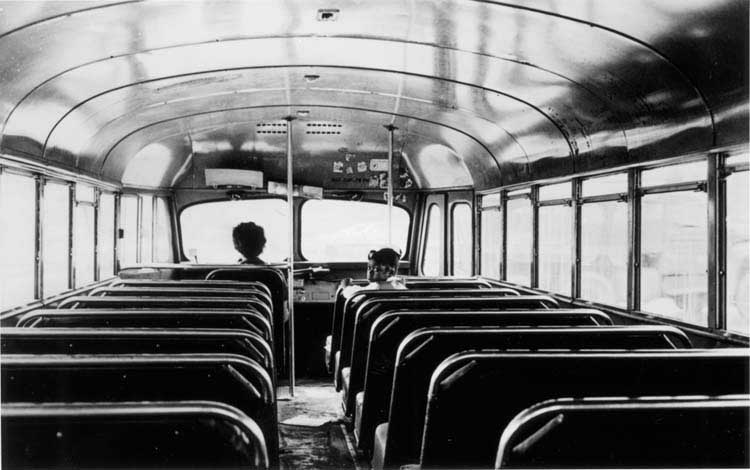 This young girl was the first African American to attend an integrated school in Charlotte. Women—and girls—played a major role in the Civil Rights movement. Since white parents wouldn't allow their children to ride school buses with African American classmates, the girl rode to school by herself. The newspaper photographer captured the scene powerfully. Courtesy of the Charlotte Observer

We can use photographs to examine the construction, architecture, and decoration of buildings at certain moments in their histories. Photographs also document trends and styles—from clothing to hair fashions to cars—across the decades.

Photographers faced certain ethical questions. Is it acceptable to stage a photograph and present it as an authentic scene? Is it appropriate to ask a subject to dress in a manner that conveys a message even when that message is not accurate? When documenting a battle scene, should one help a person in distress or photograph the scene and move on? The choices a photographer made reflected the values and ethics of the individual, period, or community.

What Are Political Cartoons?
Open the main section of a daily newspaper and turn to the editorial page. You will probably find a political cartoon there. Political cartoons use exaggerated images, symbols, and words to represent particular views through humor.

Political cartoons have been a part of American journalism since 1754, when Benjamin Franklin created a cartoon urging the colonies to join together in their common defense. Needing a symbol that would evoke a broad response, he drew a snake divided into eight parts and labeled each part of the snake as a separate colony. He added the words “Join or Die” to make his point that the colonies should unite against the French and their Indian allies. The snake became a symbol that was later used to raise support in the colonies during the time of the Stamp Act and again before the Declaration of Independence was written. 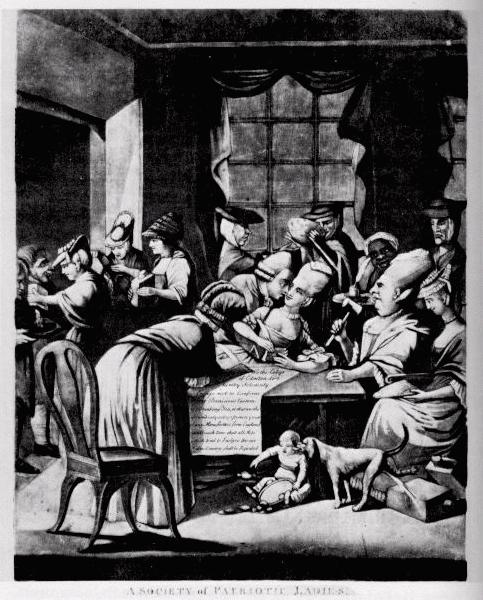 A Society of Patriotic Ladies, at Edenton in North Carolina by Philip Dawes. This parody of the Edenton Tea Party appeared in London Magazine in March 1775. It makes fun of the colonists and women and satirically predicts the consequences of the women’s political participation (note the baby on the floor). Library of Congress.

More than one hundred years passed before political cartoons appeared widely in newspapers. Because early newspapers were printed using woodblocks and engraving, drawings were hard to reproduce and were not used frequently. When technology improved in the 1880s and drawings could be printed more easily, cartoons began appearing regularly in daily newspapers. Over the years political cartoons have played an important part in journalism. Jeff MacNelly, a graduate of the University of North Carolina at Chapel Hill, won three Pulitzer Prizes for his political cartoons.

Some of our national symbols began as figures in political cartoons. Uncle Sam has changed since he first appeared in the 1800s, but he still represents the United States. The elephant was first used to represent the Republican Party in an 1874 cartoon. The Statue of Liberty has symbolized American values since 1889. The imagery of cartoons changes but always includes elements that readers recognize. Caricatures—exaggerated representations of famous people—are frequently used. Today’s cartoons often include images from television, movies, and advertisements.

Examine the political cartoons in your local newspaper to see what opinions are being expressed about current events and issues. Do you agree with these opinions, or do you have other ideas?

Using Artifacts as Primary Documents
Since the mid-1960s, historians, archaeologists, and anthropologists have slowly changed the field of history from the “great men, great deeds” approach to one that focuses on the everyday lives of all Americans. As part of this change, researchers now consider historical artifacts, landscapes, clothing, and buildings as relevant sources of historical information. There are many reasons for introducing students to the study of material objects as well as documents. Because analyzing objects is self-generated discovery, students develop confidence in observing, analyzing and drawing conclusions while learning about history. The many significant aspects of objects can also stimulate active classroom discussion and debate. 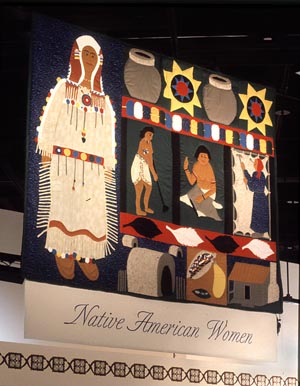 A group of female quilters from the Coharie tribe of the Sampson-Harnett Counties area made this quilt for a women’s history exhibit at the North Carolina Museum of History. It depicts the Sauratown woman, a forensic reconstruction of an American Indian woman whose remains were found in a grave along the Dan River in Stokes County. The quilt, in the museum’s permanent collection, is an example of an artifact that is not very old.

Objects can be more honest than written or oral sources. Objects can provide reliable clues as to how they were created, who created them, and why they were/are important. For example, historians once believed that slaves in American had relatively few possessions, and what they did have were merely castoffs from owners and overseers. Analyses of slave quarters by archaeologists, however, reveal that slaves purchased some things for themselves, recycled castoffs from owners, and made household objects from available materials. Handmade objects sometimes reflected African design motifs. These findings helped change the role of slaves as consumers from passive to active.

Studying objects provides valuable information about how things were made. In many old homes, wood beams, window styles, and nail types give clues about the kinds of tools used to build structures. Ceramics often have special marks from the kiln or from an artisan’s tools. This information is important in learning about technology, individual skills, and the values of a particular culture.

Objects can teach us about the “forgotten” people in history. For a long time historians used mainly written records (diaries, inventories, journals) to learn about the past. People who existed before written records were virtually left out of history. Also, the majority of Americans could not or did not write down their experiences. Slaves, new immigrants, women, and the poor were some of these people. Although they did not leave behind many written records, they did leave physical evidence of how they lived, what they did, and who they were. Archaeologists, prehistorians, historians, and natural historians often work together now to learn more about how these people lived based on the objects they made and used.

Learning about history through artifacts stimulates the visual and tactile senses. When students touch history and see the visual evidence of human existence, history takes on new importance. Using material culture in the classroom also helps students define their own cultural identity as well as their place in history.

What Is Oral History?

Oral history—spoken recollections of past experiences—refers to recorded interviews with individuals that preserve historically significant memories.

Why Are Oral Histories Important?
Participation in oral history projects affords students the opportunity to become actively involved in critical analysis and documentation of the historical record. Through the medium of oral history, students are encouraged to step beyond passive reading and memorization of information—to make connections between history's “big pictures” and the personal experience and memory of historical events at the family, local, regional, national, and international levels. Furthermore, this process provides the context for students to make intellectual, emotional, and personal connections between significant historical events and decisions made by seemingly ordinary people. Finally, oral history, at its core is the act of preserving history and memory, culture and beliefs, at the family, local, regional, national, and global level.

Analyzing Oral Histories
If you asked three people to describe an event they had participated in together, you would most likely get three stories that, while similar, varied in the details. Similarly, oral histories are firsthand descriptions of past events. In conducting an oral history project, it is important for students to recognize that they should respect an individual’s experience and recollections but that they should also do additional research to confirm the information provided (this is equally true when doing family histories). Here are several ways to verify facts in oral history interviews:

AMDOCS: Documents for the Study of American History
http://www.vlib.us/amdocs/
Links to many important digitized American documents, from 1492 to 1917.

American Memory: Historical Collections for the National Digital Library
http://memory.loc.gov/ammem/browse/updatedList.html
Over 7 million digital primary sources from the Library of Congress.

Documenting the American South
http://docsouth.unc.edu/
A digitized collection of sources on Southern history, literature, and culture from the colonial period through WWI from the University of North Carolina at Chapel Hill.

Primary Sources and Activities
http://www.archives.gov/digital_classroom/teaching_with_documents.html
A site from the National Archives and Records Administration that provides primary documents and teaching activities for major events in United States history.