In 1587, 117 men, women, and children set sail from England to settle the New World. They landed on Roanoke Island in Dare County. John White was governor of the new colony. His daughter, Eleanor, and her husband, Ananias Dare, had sailed with him to Roanoke Island. Eleanor gave birth to a daughter, Virginia. She was the first English child born in America. 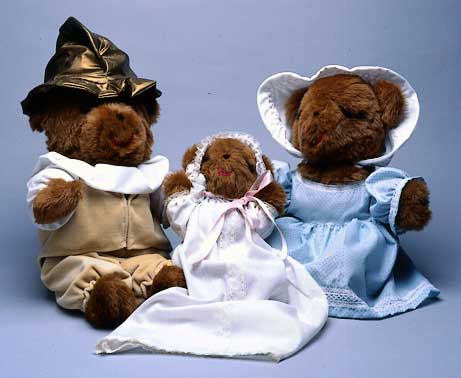 John White soon left for England to get supplies and recruit more settlers. When he arrived, England was at war with Spain. He could not return to Roanoke Island for three years.

When White finally reached Roanoke Island in 1590, he found no one. The settlement had been abandoned. The only clue was the word CROATOAN carved on a post. What had happened? White hoped that the colonists had joined the friendly Croatoan Indian tribe. But he never found out.

Even today, no one knows what happened to the Lost Colony. Several legends have grown up to explain the mystery. The Legend of the White Doe centers on Virginia Dare.

In the legend, hostile Indians attacked and killed many of the colonists after John White sailed for England. The Croatoan tribe took in the survivors. Virginia Dare grew into a beautiful young woman called Winona. Okisko was a handsome chieftain who wanted to marry her. But Chico, a powerful medicine man, also wanted Winona. When he could not win her, Chico cast a spell to turn her into a white doe.

Okisko was determined to undo Chico’s spell. A magician helped him make a pearl arrow. If he shot the white doe through the heart with this arrow, she would become human. But he had to hurry. The chief of another tribe had called for a hunt to kill the white doe. Wanchese, who had once traveled to England, armed himself for the hunt with a silver arrow he had received from Queen Elizabeth. He knew that only a silver arrow could kill the doe.

One day both Wanchese and Chico spotted the white doe. They let fly their arrows at the same time. Each arrow pierced the doe’s heart. The pearl arrow turned the doe into Winona just as the silver arrow took her life. Okisko rushed to her, and she died in his arms.

Okisko ran to a magic fountain to beg for Winona’s life. When he returned, she had vanished. Later the white doe appeared before Okisko and then dashed into the woods. To this day people tell of seeing a ghostly white doe near the area where the colonists settled.

People have wondered about the fate of the lost colonists for than four hundred years. What do you think happened to them? 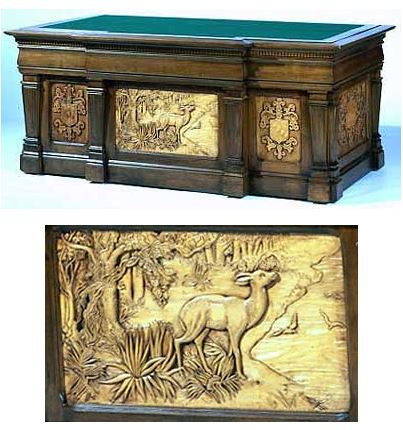 The Virginia Dare Memorial Association had this desk built for a North Carolina exhibit at the 1893 Columbian Exposition in Chicago. The desk’s middle panel represents the white doe legend.