Today the structures stand almost forgotten, scattered across the North Carolina countryside. Some are now houses, businesses, or barns. Others—particularly those that stand next to churches as community halls—still retain the large banks of windows that mark them as school buildings. These are Rosenwald Fund schools, landmarks in the history of Afro-American education.

In the short run, the Rosenwald Fund had an impressive effect. By the early 1930s thousands of old shanty schoolhouses had been replaced with new, larger structures constructed from modern standardized plans. Over 5,300 Rosenwald buildings blanketed fifteen southern states. More were erected in North Carolina than in any other state. Through a combination of active leadership in the state Department of Public Instruction and enthusiastic fund raising by blacks at the grass-roots level, North Carolina constructed more over 800 Rosenwald buildings. . . 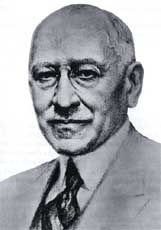 Julius Rosenwald was born August 12, 1862, in Springfield, Illinois, the son of a German-Jewish immigrant who had risen from peddler to partner in a clothing concern. In 1909 Julius Rosenwald became president of Sears, Roebuck and Company, a firm that he joined in 1897. With the personal fortune that he amassed, he also became known as one of America’s leading philanthropists.

While Rosenwald supported a wide range of causes, his chief concern became Negro education in the South. . . . Reading a number of books—especially Booker T. Washington’s Up from Slavery—had also sparked big interest in charitable works for blacks. After providing matching grants for a handful of black YMCAs, Rosenwald met Washington in 1911 and soon became a trustee of Tuskegee Institute.

Initially, Booker T. Washington’s Tuskegee Institute staff administered the Rosenwald program. . . . By 1920, however, the burgeoning construction program was more than Tuskegee could handle, and Julius Rosenwald created the Rosenwald “Southern Office” in Nashville, Tennessee. To run it he hired Samuel Leonard Smith, who not only had a decade’s experience administering Tennessee’s rural Negro school program but also possessed a keen interest in country schoolhouse design.Washington persuaded Rosenwald that help was needed not just with higher education as offered at Tuskegee but with elementary schools throughout the South. When on the occasion of Rosenwald’s fiftieth birthday the tycoon presented Washington with $25,000 to aid black colleges and preparatory academies, the black educator asked to use a small amount for grants to black communities near Tuskegee that wanted to build rural elementary schools. Rosenwald agreed, stipulating that each community had to raise its own funds to match the gift. In 1913 the first “Rosenwald School” was dedicated in Alabama. By the time that Booker T. Washington died in 1915, Rosenwald had already personally given matching money for some eighty black schools in a three-state area. Two years later Rosenwald established the Julius Rosenwald Fund to continue and expand his charitable activities. . . .

One of Smith’s first actions at the Nashville office was to draw up a series of school plans. Production of stock blueprints, he reasoned, would enable any rural community to build a top-flight facility, without architects’ fees. Smith initially issued school designs one at a time in four-page pamphlets, “made available upon request to white and Negro schools alike.” Demand proved so great that in 1924 the southern office reissued the pamphlets as a book entitled Community School Plans. It included floor plans and exterior renderings of seventeen schools ranging in size from structures having one teacher to those having seven teachers. . . . Once a community chose a design, detailed blueprints and specifications could be obtained from the Rosenwald Fund via a state’s education office. . . 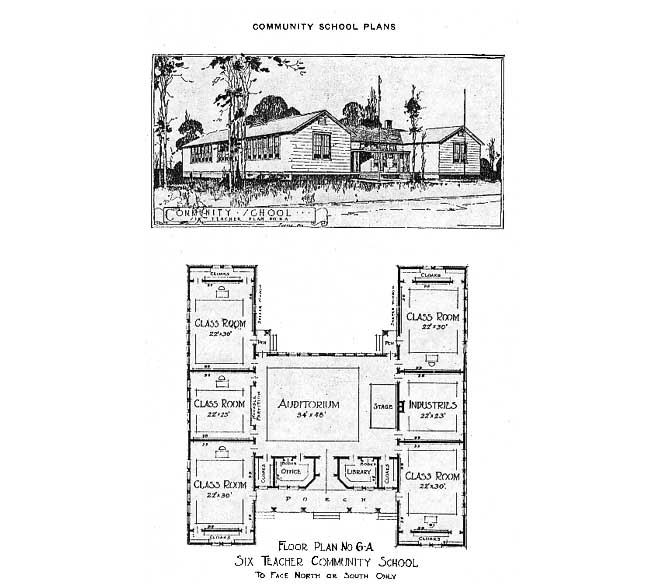 Rosenwald plans incorporated the most up-to-date designs in American rural school architecture. The six-teacher facility in this drawing was designed "to face north or south only;" most plans had two versions to accomodate schools facing in any direction. The schools originally had no electricity, and to maximize natural light the plans included detailed suggestions for window placement, desk orientation, blackboard location, and other arrangements.

In 1921 the North Carolina General Assembly formally created the Division of Negro Education within the State Department of Public Instruction. The staff consisted of Director [Nathan] Newbold and five administrators, three black and two white, plus a secretary and two stenographers.

The Rosenwald system remained an integral part of the division’s efforts through the agency’s first decade. By the time the Rosenwald Fund closed out its construction program in 1932, North Carolina had constructed 813 Rosenwald buildings, far more than any other state. . . . Of the North Carolina projects, 787 were schoolhouses, 18 were teachers’ residences, and 8 were industrial education shops. . . .

Raising local black money for Rosenwald schools was no simple task among the cotton and tobacco tenant farmers of North Carolina. . . . A successful rally yielded both cash donations and pledges. . . . Thus, money for the Rosenwald schoolhouses was gathered a penny and a nickel at a time. . . . 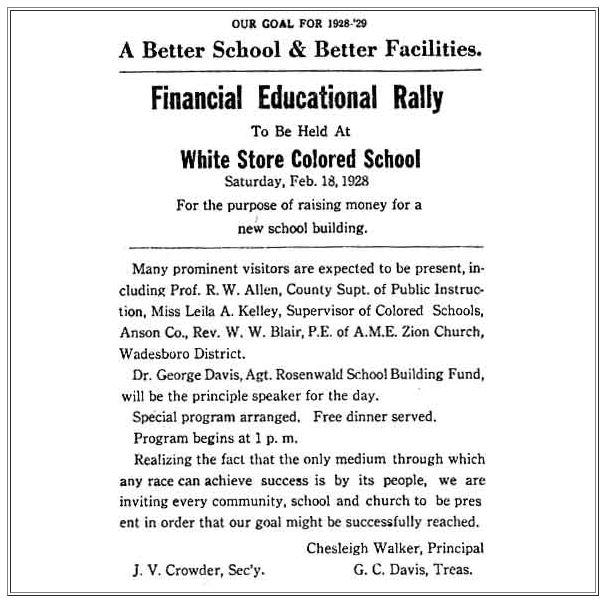 Grass-roots fundraising was a key component in the Rosenwald effort. Dr. George E. Davis, North Carolina's supervisor of Rosenwald buildings, led hundreds of rallies—like the one this handbill announces—in rural black communities across the state to incite enthusiasm and raise money for school building.

All the schools were centers of small rural black settlements. . . .

Beginning in 1928, the priorities of the Rosenwald foundation changed. . . . Rosenwald grants to North Carolina during the late 1920s and 1930s included pilot programs for rural library service in Mecklenburg and Davidson counties, aid for the purchase of school buses in rural areas, and substantial support for the University of North Carolina Press for its “courageous [work] in printing and distributing reports and texts on southern problems”.

. . . By July 1, 1932, a total of 5,357 Rosenwald schoolhouses, shops, and teacherages stood in 883 counties of fifteen states, erected at a total cost of $28.4 million. The Rosenwald Fund’s donation of some $4.3 million had sparked $4.7 million in black contributions. Local governments had in turn spent $18.1 million . . . with private local white contributions making up the remaining 4 percent. In North Carolina, black residents had contributed more than $666,000 toward the new Rosenwald buildings. . . . More of the state’s black children now went to school, and they benefited from longer school years and from better trained teachers. 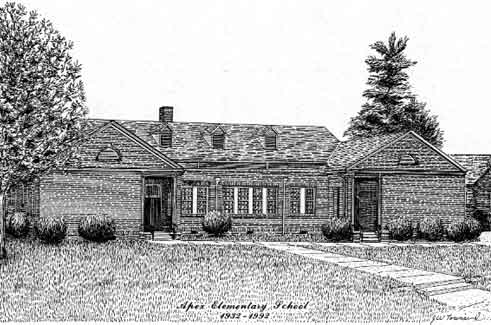 The Apex Elementary School was constructed between 1931-1932. Unlike most Rosenwald Schools, which were built with wood siding, the Apex facility was constructed of brick and when completed was one of the finest small school buildings in Wake County and a source of pride within the black community. The school's construction totalled $11,200 with Rosenwald funds paying $2,000, public tax funds $7,700, and contributions by blacks totaling $1,500—a sizeable amount during the years of the Great Depression. The school initially contained only eight grades and students seeking a high school education were bussed to Berry O'Kelly School in Method, near Raleigh, until 1952. Over the years what became known as the Apex Colored School was gradually expanded with new additions and eventually served black at all grade levels until schools were integrated in the 1960s. 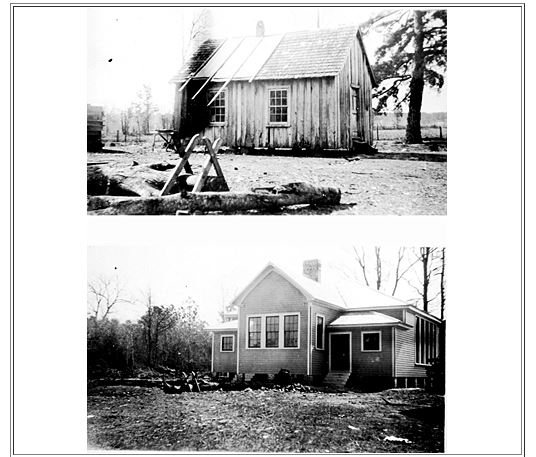